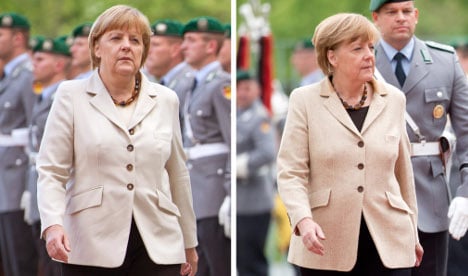 The chancellor has reportedly lost 10kg since her ski accident. Photo: DPA

The Merkel diet, designed to stop her putting on pounds while on crutches following a ski accident in December, is heavy on fruit and vegetables and light on carbohydrates, Bild newspaper reported.

The 59-year-old has given up the German specialty Mettwurst – raw pork mince spread on bread – as well as cheese rolls.

Biscuits placed on the table during her morning meetings have also been binned and replaced by peppers, leeks and carrots.

“She is very disciplined and eating more fruit,” Bild newspaper quoted a chancellery source as saying, under a headline “Suddenly so slim”.

Merkel also seems to stick to her diet on foreign trips. While visiting President Barack Obama last week she ate a salad grown in the White House’s own vegetable garden.

SEE ALSO: 'I slept through phone call from Merkel'