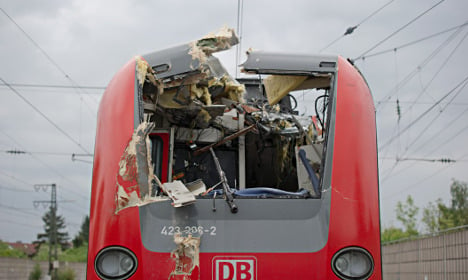 The train was derailed in the crash. Photo: DPA

The S-Bahn train collided with the digger at Olching, 20 kilometres northwest of Munich, injuring four construction workers and the train’s driver.

It was not carrying any passengers but it derailed causing delays on the S-Bahn and on regional services.

The digger was being used for work on an opposite track to the train, but it appeared to pivot, hitting the driver’s carriage. The force of the impact smashed the digger into a wall and flying debris damaged three neighbouring houses. The driver was seriously injured and flown by helicopter to hospital. The four construction workers suffered minor injuries.

Services between Munich and Augsburg were diverted through Ingolstadt.

Munich’s metro was also hit by delays on Wednesday morning when a circuit shorted at Karlsplatz station. Thousands of commuters were late for work.