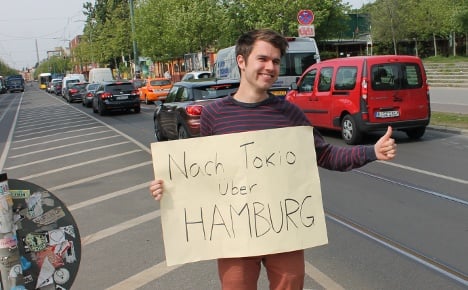 Arthur White holds out his "to Tokyo via Hamburg sign". Photo: Tom Bristow

While countries like Italy, Sweden and Spain are considered "senseless" for catching a free ride, most hitchhikers gave Germany a rating of "good" or "very good" on hitchhiking site Hitchwiki.

The site is a useful encyclopedia for hitchhikers, featuring user edited pages on where to hitchhike and tips on how to find drivers and stay safe on the road.

A worldwide map allows users to pinpoint spots where they hitchhiked and rate them on a five-point scale. With over 2,000 points on the map, Germany is far and away the most hitchhiked country, beating second-place France.

The Local spent two weekends travelling to Lübeck, Hamburg, Berlin and across to Poland to find out what it's like thumbing it through Germany in search of adventure.

According to the Hitchwiki page on Germany, Germans are a "reticent" bunch, "but nice if you get to know them”.

Luckily, the country has a longstanding culture of hitchhiking, which can make it easier to connect with drivers.

Another advantage is the country's excellent autobahn system.

A longtime user of Hitchwiki, Pascal Dumont has hitchhiked over 75,000 km and through 45 countries. He's been through almost every region of Germany, and agrees that it's one of the continent's best spots.

So long as you remember a few tricks: dress well, dance, smile and, most important, have a funny sign.

"You just need to bring a sign that says 'Tokyo' since Germans are sometimes reticent. There's nothing better than a good old ice-breaker to get in their fancy ride," he told The Local.

Keeping that advice in mind, we drew up a giant sign that said "Nach Tokio über Hamburg". We started out in Lübeck, Schleswig-Holstein, where passing tourists asked us to stop and pose for their pictures.

Our spot, on a major street not far from the autobahn, got a "good" rating on Hitchwiki. Once we arrived, it only took about 15 minutes before a family of four stopped and took us to Hamburg.

Getting from Hamburg to Berlin wasn't quite so easy. The spot we chose by the A24 was very popular, with six other hitchhikers coming and going during the hour-and-a-half it took to get picked up.

One of them was Tina Glantz, a childcare worker with dreadlocks from a village near Lübeck.

Tina started hitchhiking as a child to get to her school in the next town. Since then, she has taken two round trips from Berlin to Istanbul.

"It's a way to travel on a low budget, but it's also an adventurous way to travel where you're never sure what will happen or who you will meet," she told The Local.

Most people think hitchhiking is dangerous, she admits, but there is no need to be afraid as long as you take a few precautions.

"Fear doesn't always give good advice, but you need to pay attention,” Tina said. “If someone comments on my appearance or my body then I don't go… Just don't be naive and listen to your gut. You don't have to accept a ride. It's always your choice," she said.

Just to be safe, she carries a bottle of pepper spray in her purse and sends pictures of license plates over her mobile. This can be useful leverage if she gets into trouble.

Along with Tina and an amateur actress, we got picked up and driven straight to Berlin by a friendly couple. No need for the pepper spray. Hitchwiki has information on how to hitchhike almost anywhere. There are pages on hitchhiking on boats and barges, hitchhiking with dogs and hitchhiking races around the world. This year in June the hitchhiking world championships will begin in Aachen, Germany.

The site is full of tips, tricks and techniques, including a page on "things to carry." Recommendations include a big black marker, a small umbrella, an aluminized Mylar "space blanket," a harmonica or kazoo and, of course, a good map.

One important tip is to always make sure that you stand in a place where cars have a safe place to pull over, since most drivers won't put themselves in danger just to help out a stranger.

This was a big problem as we headed east from Berlin, hoping to reach Frankfurt (Oder) on the Polish border. A solid steel grating ran along both sides of Frankfurter Chaussee in Berlin, forcing us to walk more than a kilometre before we found a spot where stopping was possible.

Our first ride, a couple and a big Labrador dog in an old Volkswagen van, could only take us about 10 kilometres.

We got them to drop us off at a petrol station, a prime hitchhiking spot. Petrol stations provide an opportunity to communicate directly with drivers and reduce the danger of standing around by the side of the road.

Still with our trusty Tokio sign, we asked drivers tanking up "are you driving to Tokyo?" invariably getting a "not today" and a laugh. "Maybe Frankfurt then? Or even the next petrol station?"

It took us two more rides to get to the Polish border. Our last trip with an elderly German couple won us a history lesson on eastern Brandenburg and a bag full of fresh food from a supermarket in Seelow.

All expenses paid, plus a €5 note for good measure.