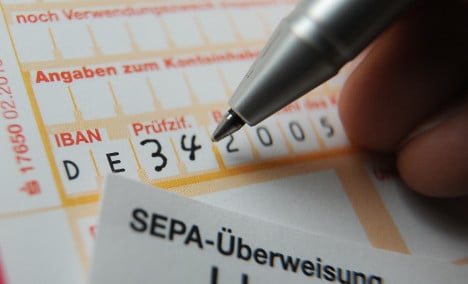 The man will now be on the Central Bank's terror watchlist for ten years after writing "bin Laden" on a money transfer. Photo: DPA

The man was transferring €480 to his friend for a ski trip when he wrote bin Laden on the form under a section asking what the money was for.

But his unfortunate joke was picked up by computer software put in place to detect transactions which could be funding terrorism, Augsburger Allgemeine newspaper reported.

The monitoring software is compulsory for all banks by EU law and screens all transactions for keywords and key phrases connected with terrorist groups and individuals.

And the man's chosen message, "because you're so delicious, thanks for the night council 1 ak47 bin laden", was immediately flagged by the system as the deceased former Al Qaida chief's name is among the red-flagged phrases, according to Bayerische Rundfunk radio.

Instead of looking into whether the mention of bin Laden was a threat or a harmless joke, the man's bank passed his case straight up to the German Central Bank, who blacklisted him before sending it on to the state prosecutor, the Augsburger Allgemeine said.

The man told Bayerische Rundfunk he was "shocked" by the bank's actions and stressed it was just a joke.

But this swift reaction to his careless joke may now have brought the unfortunate Munich man to the attention of other anti-terror authorities.

Bavarian Banking Union spokesman Silke Wolf said: "He will also turn up in a lot of other lists now."

"That can get unpleasant when you try to cross borders," she added. "It's best if you just write on the form what the money is for."