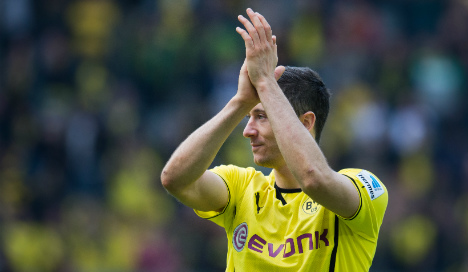 Lewandowski failed to hit the net in Borussia's 3-2 win over Hoffenheim on Saturday with Dortmund set to finish their league campaign second to champions Bayern in the Bundesliga.

Having signed for Bayern next season on a free transfer, the Polish hot-shot now has two games left in the Dortmund shirt — at Hertha Berlin next Saturday in the league, then the Berlin cup final against Bayern on May 17th.

The 25-year-old was given a standing ovation at the Westfalenstadion having scored 72 league goals in 130 games during his four years at Dortmund and wants to bow out by lifting the German Cup.

"I have always said that I want to sign off with a title," said Lewandowski, who was presented with a bouquet and a photo collage of his time in Dortmund.

"I want to thank everyone who was involved in this farewell ceremony.

"I am proud that something like this is still possible in the over-inflated football world."

The Poland star has scored 26 times this season in all competitions and is Dortmund's record goal-scorer in Europe with 18 goals.

"He has earned this farewell, he has always given his all and will do so for the last two games," said Dortmund coach Jurgen Klopp.

Lewandowski became the only player to score four times in a Champions League semi-final when he netted all of Dortmund's goals in last season's 4-1 first-leg win over Real Madrid as Borussia went on to lose the 2013 final to Bayern.