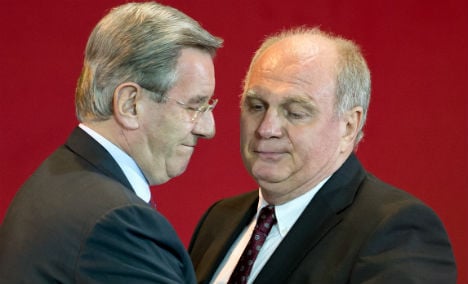 Karl Hopfner and Uli Hoeneß embrace as the former succeeds the latter as club President at Bayern Munich on May 2nd 2014. Photo: DPA

The 61-year-old Hopfner received the backing of 1,593 club members at an extraordinary general meeting, but Hoeneß spiced up the occasion by insisting that he has no plans to retire once he is a free man.

"I made a huge mistake and I will accept that. When I return, I am not going to retire," said the 62-year-old Hoeneß, who is still waiting to start serving his three and a half year jail term.

Hoeneß, who was convicted of cheating the state out of €28.5 million ($39.5 million) in unpaid taxes, received a standing ovation from the club members.

"I am leaving with a clear conscience with no worries for the club," he added.

Hopfner has spent more than 30 years at Bayern filling positions such as vice-president and serving on the executive committee.

"Dear Uli, you have a great family but you also have a family at the club," said Hopfner.

"We wish you all the strength necessary for the difficult times ahead. You can decide what you want to do after."

The vote came at the end of a week which saw the Bundesliga champions dumped out of the Champions League by Real Madrid in the semi-finals.

However, they can complete a domestic double when they take on Borussia Dortmund in the German Cup final in Berlin on May 17.