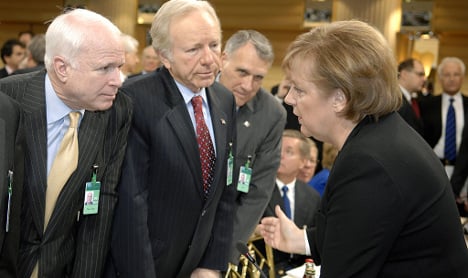 John McCain's comments have not gone down well in Germany. Merkel is pictured with the US senator here in 2007. Photo: DPA

John McCain, a former Republican candidate for the White House, on Thursday accused Merkel of standing in the way of firmer measures against Russia over its actions in Ukraine due to Berlin's lucrative business ties with Moscow.

"I would tell her that I am not surprised but embarrassed at their failure of leadership. They're the leaders, they're being governed by the industrial complex from Germany," McCain said.
Republican Senator Jeff Sessions echoed the rebuke, saying there needed to be "a clearer, more focused, more unified position, and Germany is right there in the middle of it."
The remarks sparked outrage in Berlin, with top-selling newspaper Bild saying McCain had "attacked" Merkel with "crass" comments.
A leading MP from Merkel's conservative Christian Democratic Union, Karl-Georg Wellmann, told news website Spiegel Online that McCain's accusation that industry called the shots for the German government was "vicious nonsense".
"What we need to do now is keep the peace in Europe and maintain the Western alliance in this difficult situation – this is something the chancellor in particular is doing a lot to achieve," he said.
In a parting shot, he added: "McCain would do better to ensure that the closest allies are no longer spied on," referring to revelations that the US National Security Agency snooped on foreign leaders including Merkel.
The Social Democrats, junior partners in Merkel's grand coalition government, also took umbrage at McCain's comments.
"It's poor form," parliamentary deputy Rolf Muetzenich told Spiegel. "McCain feels insecure because his Russia policy of containment and military build-up is very controversial, even in the US."
Merkel is due to discuss Ukraine with Obama later on Friday at the White House as tensions between Russia and the West unseen since the Cold War continue to mount.
Germany, Europe's top economic power, gets about one-third of its oil and gas from Russia and has strong trade ties with Moscow.
But Merkel's tone on the crisis has sharpened in recent weeks and a senior aide said Tuesday that she would also discuss the possibility of levelling
economic sanctions against Russia with Obama if the situation in Ukraine further deteriorates.
SEE ALSO: Merkel heads to US for Obama talks