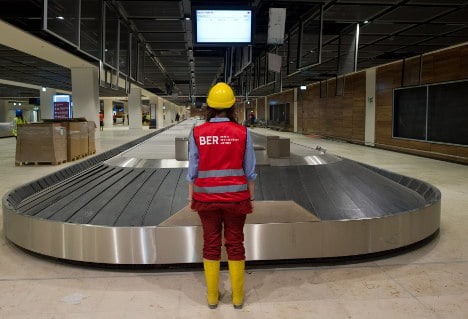 Chief executive of Berlin Brandenburg airport Hartmut Mehdorn warned of cramped conditions in the busiest area of the terminal building of the airport which is now four years behind schedule.

“The latest calculations show that Airport Berlin Brandenburg will open for over 30 million passengers. At this point in time it is already too small,” Mehdorn said in the airport’s most recent progress report.

By 2020, the number of passengers is expected to reach 35 million, meaning the new airport will have to be expanded.

“We already foresee a bottleneck situation, in particular at the check-in, security and the luggage reclaim when the airport opens,” Mehdorn wrote.

The luggage reclaim area at the airport will also have to be significantly expanded.

Extra funds have been approved by the board of directors to build further luggage belts in addition to the existing eight. In a letter to employees, Mehdorn wrote that another two luggage belts are required.

Mehdorn also said he wanted the neighbouring airport Schönefeld to stay open to accommodate a proportion of passengers, which was rejected by the board of directors on April 11th.

The airport was supposed to open in 2012 and currently has no opening date. It is not expected to open before 2016. It has also run billions of euros over budget. The latest cost estimate is at least €6 billion, more than double its original budget of €2.8 billion.