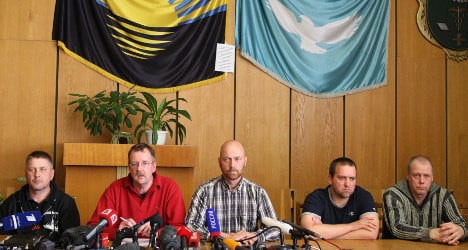 The hostages were paraded on Sunday at Slavyansk Town Hall. Photo: DPA

Germany’s Foreign Office spoke on Wednesday of “difficult” negotiations between the OSCE and the separatists in the eastern Ukraine town of Slavyansk.

A spokesman for the German Foreign Office said he did not know when the hostages might be released.

And government spokesman Steffen Seibert once again demanded an end to the “criminal act” by pro-Russia militia.

Earlier on Wednesday hopes were raised that the international unarmed observers would shortly be released by their captors who want to cede from the rest of Ukraine.

The self-styled mayor of Slavyansk Vyacheslav Ponomaryov said the group of eight could be set free “soon”.

But he once again stressed, he had no influence of over the pro-Russian separatists in eastern Ukraine who have declared themselves independent from the Kiev government.

Germany’s government has strongly condemned the capture saying it was without “any reason”.