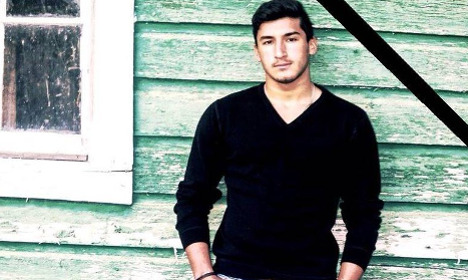 A football match in Hamburg on Wednesday is being held in Diren Dede's honour. Photo: Teutonia10.de/screenshot

The 29-year-old shooter, Markus Kaarma, was taken into custody on Sunday and charged with murder on Monday after Montana police found the victim with a gunshot wound to his head.

"Initial reports indicate that the male resident encountered an intruder in his garage after an alarm went off, and subsequently shot him with a shotgun," police sergeant Travis Welsh said.

Diren Dede, from the Altona area of Hamburg, was studying at Big Sky High School in Missoula on a year abroad where he played for the football team.

He also played for SC Teutonia 1910 in Hamburg and the club's cup match on Wednesday will be dedicated to him.

"A voice we knew has fallen silent, but the memories will remain forever," the club said on its website. Money will also be collected at the game for his family.

Tributes to Diren were also posted on a Facebook page for Wednesday's memorial match.

"The world has lost a soldier, but paradise has gained an angel," wrote one of his friends.

"He would be incredibly proud of us. Rest in peace," wrote another.

According to the Hamburger Morgenpost, Dede's grandmother has been taken into hospital suffering from shock and his father was due to fly to the US on Tuesday.

If convicted, Kaarma faces a minimum of 10 years and up to 100 years in state prison. Acting Justice of the Peace Suzanne Geer set bail at $30,000.

Defense lawyer Paul Ryan said Kaarma and his common law wife, Janelle Pflager, had been robbed twice in the previous three weeks and had installed screen surveillance and motion detectors. They have a 10-month-old son.

The two were on their couch, watching television, when an alarm sounded.

"They had no choice in their mind other than to confront the intruder," Ryan said.

Ryan said Kaarma felt terrible about killing Dede. "It wasn't his intent to even kill," he said. "It's really tragic, there's no question."

Paul said Kaarma fired four distinct shots, covering the entire back wall of the garage with his shotgun.

"He was just shooting in the dark," Paul told AFP news agency.  Paul wouldn't confirm that a second person had been with Dede on the night of the shooting, but noted that a friend had suggested the exchange student had entered the garage looking for something to drink.

Prosecutors accused the defendant of having a mindset of revenge. Paul cited a witness who alleges that Kaarma issued threats at a hairstyling salon on April 23. The hairstylist, Felene Sherbondy, quoted Kaarma as saying: "I'm just waiting to shoot some fucking kid," according to the prosecution's affidavit.

Missoula County Schools Superintendent Alex Apostle called the shooting a tragedy. "We are all pulling together to support the students, staff and families of Big Sky High School," he said.

The Council on International Educational Exchange, which organized Dede's stay, sent representatives to Montana, to meet with all parties and provide support. The student's family was also expected in Missoula in the coming days.

Ryan said he expected his client to plead not guilty at the preliminary hearing set for May 12.

He said he would invoke the so-called "Castle Doctrine," under which Montanans have the right to use deadly force to protect their homes if they feel threatened.

In 2012, Montana prosecutors decided not to charge a man who shot and killed another man in his garage.