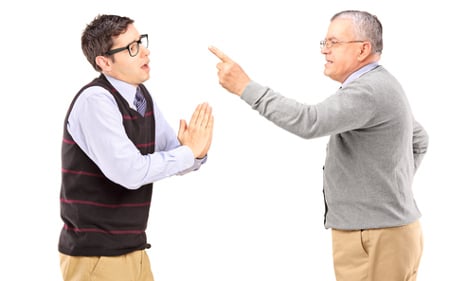 Even if you are new to the German language or still struggling with the endless grammatical rules, you are probably aware of the precarious business of when to use du or Sie – the informal and formal forms of “you”, when addressing someone in German.

The rules are baffling at the best of times, but as general guide, if you find yourself talking to someone in a position of authority, or co-workers, you should use the Sie form (verb: siezen).

However, if the person is a friend, a peer, or a child the du form (verb: duzen) is used.

Sounds simple? Believe me, it isn’t. Using the wrong form is not just mildly embarrassing, it can release torrents of outrage from Germans, as a couple of The Local’s readers found out to their expense.

“The first person I met on my exchange programme in Munich was a fellow student. I spoke to her using the Sie form. She shouted back at me “Sie!?” She was obviously insulted. I should have used du,” one reader told The Local.

“After that, I lost all confidence in my du and Sie and then made the faux pas of addressing my university supervisor with du.”

Daniel, a Brit in Berlin was having an argument with his landlord. In mid-argument, adding insult to injury, Daniel accidently called him du, making his landlord even more enraged, compounding the argument.

Surely this is why we need to abolish this stupid grammar rule.

Years ago, I was introduced to a former boyfriend’s mother. When we were invited over for lunch she addressed me as Sie, which as a Brit, I found rather odd, and to be honest, a little insulting.

I was having a meal in her home and everyone else was calling each other du, but rule dictated that I use the formal Sie.

In Germany, it’s the custom to wait for an older person to offer you the du form, not the other way around. It wasn’t until our third meeting that she very politely asked if she could duzt me? I’m British and going out with her son, of course she could duzt me!

A perfect example that highlights the absurdity of using the outmoded Sie is Matthias’ story.

“In my company we all use the Sie form with co-workers,” the computer engineer from Berlin told The Local. “One time, after an alcohol-fuelled work party, a female co-worker and I decided to continue the party back at mine. But we were still calling each other Sie,” he continued.

Back at his, things progressed more intimately. “It wasn’t until the next morning that I asked her if we could start calling each other du,” he recalled.

You can see how ridiculous it can all get.

So dear Germans, it would appear you can become acquainted on many different levels, but if you want to display decorum, the rules of address must be adhered to in every situation.

In a time when your language is becoming increasingly anglicized, where every second sentence you hear these days is peppered with English words, isn’t it time to go one step further and drop the Sie and embrace the du, for everyone’s sake?