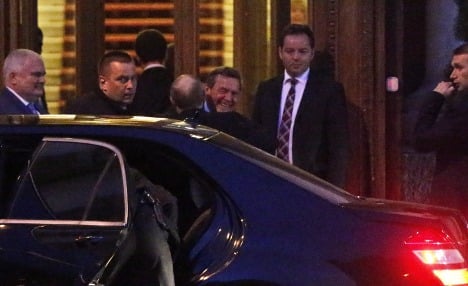 A photo of Schröder embracing Putin at the former Chancellor's 70th birthday party in St Petersburg caused indignation in Germany on Tuesday. Critics questioned the appropriateness of the gesture in the middle of the highly-tense international crisis over Ukraine.

The ex-Chancellor, who works for Nord Stream AG, the Gazprom-dominated German firm currently building a controversial German-Russian gas pipeline, was invited to a party in his honour by Putin.

His attendance at this point in the Ukraine crisis has made a "mockery" of German foreign policy, said Spiegel Online on Monday.

German consumers, meanwhile, are feeling increasingly worried about the crisis, a poll showed on Tuesday.

"Apparently the events in Ukraine are showing their first effects," market research company GfK said in a statement. "Relating to the further economic development of Germany, citizens seem to be slightly unsettled for the first time," it said.

The latest GfK survey, based on responses from about 2,000 households, also showed a slight drop in economic expectations from March to April, the first fall since mid-2013.

Willingness to spend money also fell, the survey showed, pointing to possible effects of the Ukraine crisis, while expectations over pay was the only indicator that rose in April.

On Monday German Foreign Minister Frank-Walter Steinmeier tried to quell fears of an imminent invasion of Ukraine by Russian forces, despite a massive deployment along the border of the two countries.

"We do not have for the moment any sign indicating that there is an imminent risk of a Russian invasion of Ukraine," Steinmeier said at a press conference in Oslo, while adding that the military build-up was a "threat."

"But how is the situation going to develop? It's very difficult to say," he said. "I don't even know what is going to happen in the next few days, not to mention the next weeks."

According to NATO, Russia has amassed up to 40,000 troops on the Ukrainian border.

Steinmeier called on Russia to help restore calm in eastern Ukraine where pro-Moscow militias have launched violent attacks and seized several towns in the Russian-speaking region.

He made a special appeal for the release of OSCE military observers – four of whom are German – who have been taken hostage by the rebels.

His comments came as both the United States and the European Union on Monday imposed new sanctions against Russia for failing to defuse the situation in Ukraine, the worst East-West crisis since the Cold War.