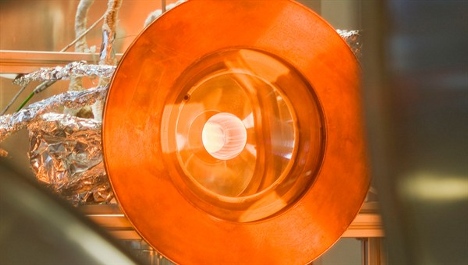 Researchers hope to eventually use the renewable fuel to power different forms of transport and said on Tuesday they had succeeded in producing the world's first jet fuel from sunlight, water and carbon dioxide.

The EU project claims it has the potential to provide "secure, sustainable" supplies of aviation fuel as well as diesel and gasoline, or even plastics.

"The basic idea is to reverse the combustion process. What we do is take carbon dioxide and water vapour, and introduce energy to produce fuel," said Patrick Le Clercq, responsible for the project at the German Aerospace Centre's (DLR) Institute of Combustion Technology in Stuttgart.

The centrepiece of the four-year project, known as SOLAR-JET, is a solar reactor that uses focused sunlight to heat up a metal oxide. Water and carbon monoxide are then passed into the reactor at 700C, where they spit up and form into a synthetic gas composed of hydrogen and carbon monoxide.

The gas is then compressed and sent to Shell, where it is converted into a hydrocarbon fuel similar to conventional kerosene. ETH Zürich and Bauhaus Luftfahrt are also participating in the research, which is still in its experimental stages. The next step will be to develop it into a commercially viable process.