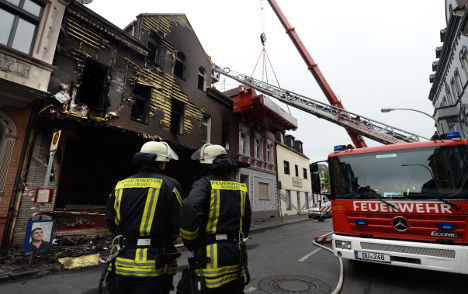 Firefighters discovered three bodies of a man, 27, his partner, 19 and a baby girl just a few months old, while evacuating a block of flats in the western city of Duisburg as they battled a fire in a Chinese takeaway on the ground floor.

The victims had died of smoke inhalation in their beds, police said on Tuesday.

Neighbours had been woken in the middle of the night by the sound of a neon sign crashing to the ground. They notified police and the fire service at around 2.30 am.

When emergency services arrived at the block flames were engulfing a takeaway, a fire service spokeswoman told dpa news agency. After quelling the blaze, firefighters found the bodies of two adults and a child in the loft while evacuating the building.

Police bellieve the fire may have started after a technical fault in the takeaway, they told Die Welt on Tuesday.