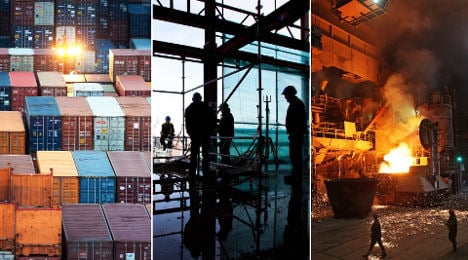 "After the extremely strong start to the year, economic growth in Germany is expected to see a noticeable slowdown in the second quarter," the Bundesbank said in its latest monthly report.

Growth in industrial orders has not continued with the "same intensity" as in the first two months of the year, it said.
The mild winter weather conditions of the first quarter of 2014 will also squeeze the rate of growth in gross domestic product in the following three months, it added.
However the "economic underlying trend" is expected to remain clearly on the up due to the "exceptionally favourable consumption climate and the active demand for home building", it noted.
Highlighting a first quarter expected to show very strong growth, the central bank pointed to a considerable rise in industrial production after a dynamic fourth quarter in terms of orders last year.
The Bundesbank is pencilling in growth of 1.7 percent for 2014 followed by two percent for 2015.
The German government said this month that Europe's top economy was in the middle of a "solid upturn", even if concerns about the fallout from the Ukraine crisis are souring investor confidence.
Economy Minister Sigmar Gabriel said that economic growth "is on a broad and stable footing," as he predicted that gross domestic product growth would accelerate to 1.8 percent this year and 2.0 percent next year compared with a meagre 0.4 percent in 2013.
SEE ALSO: Business leaders attack coalition reforms

ENERGY
Who benefits the most from Germany’s inflation relief package?
Url copied to clipboard!