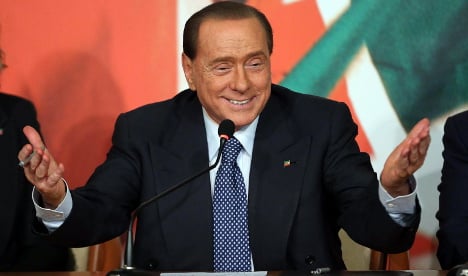 "This is what I will say for the German government on the subject: the claims that were reported are so absurd that the government won't comment on them," Chancellor Angela Merkel's spokesman Steffen Seibert told reporters.

Campaigning Saturday for the European elections in May, Berlusconi, 77, claimed that Germans denied the existence of Nazi concentration camps.

He made the comments while attacking a longtime nemesis, German Socialist Martin Schulz, who is current president of the European Parliament and the centre-left candidate in the race to lead the EU Commission.

The media mogul, who is campaigning for the European elections on behalf of his centre-right party despite a tax-fraud conviction, was defending comments he made in 2003, when he offered Schulz a part in a film as a "kapo", a camp inmate tasked with overseeing prisoners.

"I didn't want to insult him. But heavens above, according to the Germans, there never were concentration camps," he said.

"There is a man, called Schulz, who does not like Berlusconi, or Italy. Voting for the left means voting for him," he added.

The Party of European Socialists (PES) slammed the comments as "despicable" and called on the European People's Party (EPP) – the umbrella group to which Berlusconi's Forza Italia party belongs – to condemn his words.

"These comments by Berlusconi are an insult to the entire German people and not only an insult to Martin Schulz. Moreover, they are a cynical attempt to distract from the real issues in this election like the need for more jobs and growth in Europe," PES president Sergei Stanishev said.

"Germany works extremely closely and in a spirit of friendship with Italy on the European level and that will remain the case," he said.

The disgraced media magnate had bridled while in power at German demands for the eurozone's debt-mired countries to sharply curb their spending as a condition for European bailouts.

Berlusconi is known for ill-considered outbursts, including praising wartime dictator Benito Mussolini despite the Duce's persecution of Jews and allowing thousands to be deported to Auschwitz.

In 2003, he told an Italian magazine: "Mussolini never killed anyone. Mussolini used to send people on vacation in internal exile."

SEE ALSO: 'The mafia has infiltrated every sector in Germany'