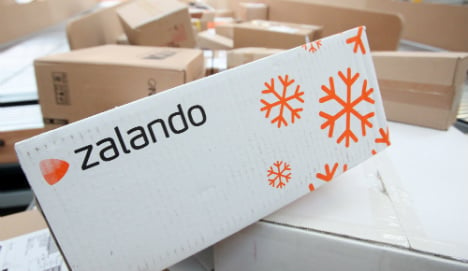 A TV journalist took a job at Zalando for three months and secretly filmed inside the centre in the central city of Erfurt, where some 2,000 staff package products for Internet shoppers.

The reporter for commercial channel RTL said she had to walk as much as 27 kilometres during her eight-hour shifts, up and down aisles in the vast centre, and was told by superiors that sitting down for a rest is "frowned upon".

While several employees, their faces disguised, are heard complaining in the report about tough conditions as their every move is digitally monitored, a local medical worker reports that ambulances are sent for exhausted workers on an "almost daily" basis.

"We are constantly subject to controls and enormous performance pressure," said the journalist, who denounced labour law violations for the job that pays just above Germany's planned new national minimum wage of €8.50 euros ($11.50) per hour.

Berlin-based Zalando AG, founded in 2008, has since grown into a multinational e-commerce company that sells shoes, clothing and other lifestyle products across western Europe and Scandinavia and is expanding into Poland.

Its marketing campaign features delighted clients who scream with joy when their goods arrive by package.

The company, which is considering an IPO, saw its turnover rise 50 percent to €1.8 billion last year, but has not yet reported a profit.

Similar criticism has also hit its competitors, including US-based pioneer Amazon, stirring debate in Germany about online retail giants allegedly riding roughshod over workers' rights to try to crush the competition by all means.

Last year Amazon found itself at the heart of a scandal after German public broadcaster ARD in a report accused it of using a security agency employing guards in typical neo-Nazi garb to monitor some of its employees.

The workers, most of them foreigners staying in temporary accommodation, also said they were paid less than the initially promised wages.

After the RTL report, some online critics mocked Germany's Zalando as "Sklavando", playing on the German word for slave.

The company, which uses social networks heavily, rejected the charges on Facebook, saying that "there is a lot of emotion, but we need to get beyond this".

"From our point of view, the presentation of the facts does not correspond at all to the culture within the company and the employees' way of thinking," it said on its website.

It claimed that its IT system primarily served to guide the logistics system, not to monitor staff, and that workers on a typical shift cover 10-15 kilometres and "of course are allowed to take a rest if they feel unwell".

The company said it regretted "individual cases" in which its managers had used a "very direct and less than collegial tone" and promised that they would be better "sensitised".

Zalando — which launched legal proceedings against the journalist for industrial espionage — also says that in an anonymous internal poll, conducted by an independent institute, 88 percent of its employees said they enjoyed working there.

Stefan Najda, spokesman of services union Verdi, told AFP that the "employees are afraid, they are often employed in fixed-term contracts, there are no works councils, and those who speak out are dismissed".

While he said the union was not calling for a boycott against Zalando, it asked that when it comes to online shopping, "customers should not use the price as the only criterion".