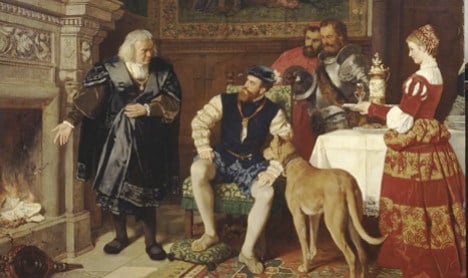 In these troubled times, when it seems that the geo-political certainties of the past are all rapidly crumbling, it pays to take comfort in the lessons of the past.

There are a few social constructions things that persist, that cannot so suddenly be upended in the face of war, plague and pestilence.

One of those is commerce – the tendency for humans to band together for the purposes of mutual material benefit. The Fugger family of Augsburg and their story is something that we can take solace in.

It all started with Hans Fugger, a master weaver, leaving the sleepy hamlet of Graben to seek his fortune in the big smoke of Augsburg, in the year 1367.

A cunning sort, he managed to enter the town's elite patrician class by marrying the daughter of a prestigious guild master. After she died, he would make another wise marital choice in marrying Elizabeth Glatterman, who herself was a canny operator.

Their offspring, three sons, would go on to learn the family trade and grow the business into a local trading powerhouse.

Over the next century, the family and the large retinue of people in their employ made some spectacularly wise investments.

First lending money to landowners, then buying up mines in the Tyrol injected a great amount of cash into the family's coffers. A gig providing outfits for the Holy Roman Emperor and his entourage landed them some prime connections.

The Fuggers started making so much money that they could afford to lend it out at a rate of interest – probably their best idea yet.

One of their best investments, however, was in the soul trade. In order to finance the rebuilding of St Paul's into the baroque masterpiece we see today, Jacob Fugger (one of many over the years) was given the job, by the Pope, of managing the sale of indulgences.

These were effectively 'Get Out Of Hell Free' cards, sold by the church across Europe.

A Dominican Friar, Johann Tetzel, was sent across the German lands under Fugger guard, selling a vision of Hell designed to have folks digging in their coin purses in haste to avoid it.

This was a huge success, with money flying in from all quarters. Of course, this didn't mean that everybody loved the idea. We all know that notorious spoilsport, Martin Luther had to get his cassock in a twist and use the idea to kick off his whole 'Reformation' project.

Once again, throwing their lot in with the Church proved to be a seriously wise choice. As good Catholics, the Fuggers were the first place to go if you were a Catholic noble and you wished to give the local Protestants a good kicking.

Entire armies were raised on Fugger coin and saw action not only in what we would consider Germany today, but across Europe. While realms clashed and cities fell, the Fugger corporate empire grew, insinuating itself into the lives of millions across Europe. The Fuggers were ubiquitous. Across Germany one can find preserved 'Fugger Houses' that acted as local branches.

In the lands they obtained (and were granted noble control over) they erected churches, funded great buildings and even engaged in early corporate PR. The 'Fuggerei' – the world's first social housing enterprise, where the yearly rent cost the contemporary equivalent of a buck – was built by the family in Augsburg.

This ubiquity would eventually prove their downfall, however. The most zealous Catholics around were the Spanish and they spent untold fortunes putting those to the sword who adopted the Protestant doctrine.

A string of military blunders, poor fiscal choices and massive, massive inbreeding (seriously, have a look at a portrait of a Habsburg sometime) eventually meant that they couldn't pay back their loans.

The sheer amount of Fugger money stitched up in Spain meant that when the kingdom went bankrupt, the Fuggers were without a vast percentage of their wealth.

The company founded almost three hundred years before was dissolved, finally, in 1607. The Fuggers family was now split into three branches, all of who persist to the present day and who are all very, very wealthy. One need only look at their website – http://fugger.de – to see the sheer size of their continuing, individual business activities of the three branches.

The Fuggers were a significant force in European politics for over three centuries and were the inspiration for many of the mega-corporations that would help build the world we live in today.

Without the Fuggers, we may not have had the traders who busted the world right open, such as the Dutch East India Company.

As we fret over the machinations of superpowers, it is important to remember that intertwined are the economic forces who, yes, do profit from conflict, but also help create the conditions for lasting peace, calm and growth. The Fuggers really were one of the agents that enabled our modern world.

I'll leave the last word to Jakob Fugger, however. He was the one who controlled the sale of indulgences. If you visit his tomb in Augsburg today, you can see these words prominently displayed, 'SECOND TO NONE IN THE ACCUMULATION OF EXTRAORDINARY WEALTH'.