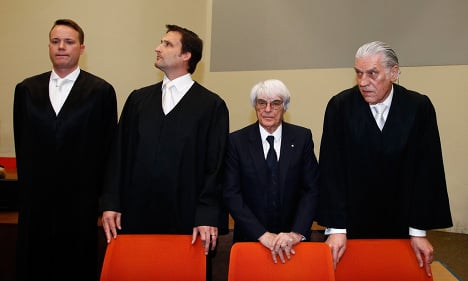 Bernie Ecclestone with his lawyers in a Munich court on Thursday morning. Photo: DPA

Ecclestone, 83, is accused of paying a German banker tens of millions of dollars to ensure his continued grip on the motor sporting empire he built up virtually single-handedly over four decades.

The mop-topped, diminutive F1 magnate entered the packed Munich courtroom in his trademark black suit and white shirt, saying only: "I'm confident, the sun is shining".

The defendant then confirmed his name and personal details, stumbling briefly before saying "yes, I am married", to which judge Peter Noll replied: "OK, those were the easy questions".

Ecclestone then silently followed line by line on paper the prosecution brief, which alleges serious corruption charges that carry a maximum jail term of 10 years.

His lawyer Sven Thomas dismissed the allegations as "inaccurate, misleading and unsubstantiated", saying "the alleged bribery did not take place."

He also declared that Ecclestone does not intend to speak for now in the trial that is set to run until September.

The case centres on a payment Ecclestone made to a German banker eight years ago, and the question is whether it was a bribe or – as the defence claims – hush money after a blackmail attempt.

The cash changed hands at a time when a German corporate bankruptcy had left several banks in charge of major stakes of the Formula One enterprise, which Ecclestone had built up since the 1970s.

Ecclestone paid €32 million to Gerhard Gribkowsky, then the risk manager of one of the banks, Germany's BayernLB.

Prosecutors charge that the money was a bribe meant to ensure BayernLB sold its shares to Ecclestone's preferred bidder, CVC Capital Partners of Britain, now the sport's majority shareholder.

They charge that Ecclestone, "the hitherto virtually uncontested leader of Formula One", saw the banks' involvement as a "nuisance" and wanted a takeover by CVC, which had made clear it would keep him on as CEO.

The crux of what is scheduled as a months-long trial will be why he paid Gribkowsky millions in 2006 – Ecclestone says he was blackmailed, the German banker says it was a bribe. Prosecutors suspect this was meant to ensure that CVC would get the rights, to allow Ecclestone to maintain tight control over the Formula One business.

The F1 boss claims he paid Gribkowsky because the German was threatening to cause trouble for Ecclestone with British tax authorities.

"Right now, I'm the loser, because people are gossiping about me, without really understanding what it's about," Ecclestone recently told German broadcaster ARD.

Gribkowsky, the former chief risk officer at Bayern LB, was jailed for eight-and-a-half years in 2012 for bribe-taking after a trial in which Ecclestone testified.

Noll, in sentencing Gribkowsky, said he viewed the Briton as the driving force who had used his "charm and sophistication" to lead the banker into criminality.

Gribkowsky is set to give evidence in Ecclestone's trial, which could lead to a jail term if the Briton is found guilty.

With 26 days of hearings initially scheduled and a verdict not expected before mid-September, Ecclestone has reduced his role in the running of Formula One pending the outcome of the trial.

He is set to be in court two days per week, a schedule designed to allow him to attend races, although he missed last Sunday's Chinese Grand Prix in Shanghai to prepare for the case.

Formula One's future could be determined by events in the Munich regional court room.

Donald Mackenzie, co-founder of CVC Funds, the sport's majority shareholder, told Britain's High Court last year that Ecclestone would be fired if he was found to have committed a criminal offence.

Ecclestone rose to become Formula One's supremo having failed to make it as a driver in the 1950s. He bought the Brabham team in 1972 and his control of the sport grew from his pioneering the sale of television rights in the late 1970s.

He became the CEO of FOCA, the Formula One Constructors Association, in 1978 which put him on the path to become head of the sport.

A controversial figure, he had to apologize for making sexist comments in 2005 when he said women should be "dressed in white like all the other domestic appliances".

Then in 2009 he drew widespread criticism for saying he admired Adolf Hitler for being "able to get things done". 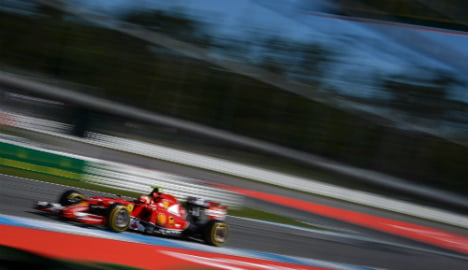 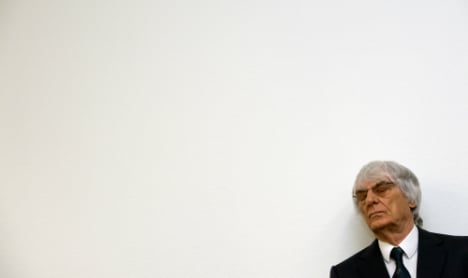