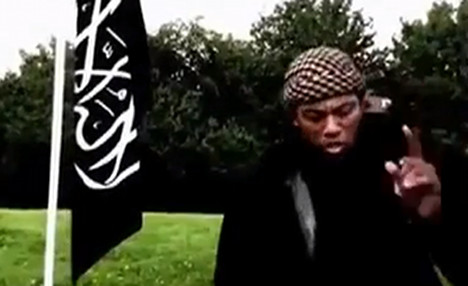 Denis Mamadou Cuspert, who rapped under the name Deso Dogg but took on the name Abu Talha al-Almani in Syria, was initially reported to have been killed in a suicide attack Sunday in an eastern province.

He was a member of the Islamic State of Iraq and the Levant (ISIL) and was reportedly killed in a double suicide bombing carried out by Al-Nusra Front, a rival jihadist group that is Al-Qaeda's Syria affiliate.
Messages posted on jihadist Internet forums announced his death.
"The Islamic nation is bleeding with the news of the martyrdom of the jihadist fighter, brother Abu Talha al-Almani. May he be accepted by God," one message read.
"His death is the result of a suicide bombing carried out by the traitorous soldiers of (Nusra chief Abu Mohammed al-) Jolani against a house in which a number of ISIL brothers were staying," it added.
The Syrian Observatory for Human Rights, a British-based monitoring group, also reported the suicide attack carried out on Sunday.
"Two members of Al-Nusra Front blew themselves up the day before yesterday, killing 16 ISIL fighters," Observatory director Rami Abdel Rahman told AFP.
Abdel Rahman said a fighter known as Abu Talha was among those killed in the attack in Deir Ezzor province near the boundary with Hasakeh province.
But on Tuesday evening, claims emerged on jihadist social media accounts that the Abu Talha killed in the attack was a different fighter and the German ex-rapper was alive and fighting in a different province.
It was impossible to confirm either claim, and photos both purporting to show the German dead and alive circulated on social media and jihadist forums.
Since early January, ISIL has been in open combat with Al-Nusra and other Islamist and moderate rebel groups, who accuse it of abuses against rival opposition fighters as well as civilians.
Both ISIL and Al-Nusra have reportedly targeted each other with suicide attacks.
The role of Al-Almani – Arabic for "The German" – in Syria attracted widespread attention and he appeared in multiple videos and photos promoting the jihadist fight in Syria.
In September 2013, he was reported to have been wounded in a regime air strike on a home where he was staying.
Thousands of jihadists, including many from Western nations, have streamed into Syria to join the fight against President Bashar al-Assad.
Many Syrians initially welcomed the foreign fighters, but ISIL has faced a backlash and even been criticized by Al-Qaeda chief Ayman al-Zawahiri, who has urged the group to leave Syria and return to Iraq.
One of Deso Dogg's tracks, filmed in Berlin.