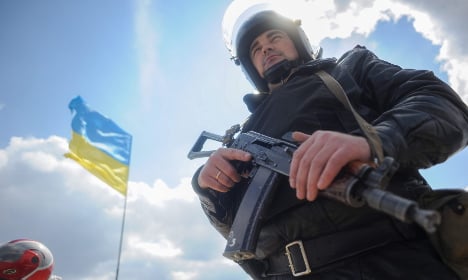 A Ukrainian policeman at a checkpoint in the eastern city of Kharkiv on Tuesday. Photo: DPA

"There must be no failure because the situation in eastern Ukraine is becoming more threatening," Steinmeier said ahead of Thursday's Geneva meeting between top diplomats of the EU, US, Russia and Ukraine.

"The occupation of public buildings in eastern Ukraine is provoking reactions by the security authorities," he told the Rheinische Post newspaper amid rising tensions between pro-Moscow militias and Ukrainian forces.
"There is the threat of more dead and injured if no exit is found from the spiral of violence. No-one could justify this, including those who from the outside are taking part in organizing the chaos."
Steinmeier said the Geneva meeting was "an opportunity, not a breakthrough and certainly not a guarantee of a peaceful solution".
"The fact that there is a meeting of the key players is good," he said. "But the real work only begins, and there will only be prospects of success when there is a real willingness in Moscow and Kiev to seriously get to work defusing the conflict and to begin efforts toward the economic and political stabilization of Ukraine."
'Civil war'

Earlier on Wednesday Russian President Vladimir Putin warned Chancellor Angela Merkel that Ukraine was on the verge of civil war after the Kiev government sent in the army against separatists in the east of the country.

"The Russian president remarked that the sharp escalation of the conflict has placed the country, in effect, on the verge of civil war," the Kremlin said in a statement on telephone talks between the two leaders.

But the leaders both "emphasized the importance" of the planned four-way talks on Ukraine on Thursday between top diplomats of Russia, the European Union, the United States and Ukraine.
"The hope was expressed that the meeting in Geneva can give a clear signal to return the situation to a peaceful framework," the statement said. The Kremlin statement described the actions of the Ukrainian army in eastern Ukraine as an "anti-constitutional course to use force against peaceful protest actions".
Putin told Merkel about the importance of stabilizing the Ukrainian economy and ensuring that supplies of Russian gas to Europe are not interrupted.
The West has accused Russia of supporting anti-government militia in the eastern Ukraine.
SEE ALSO: Germany warns of war in Europe