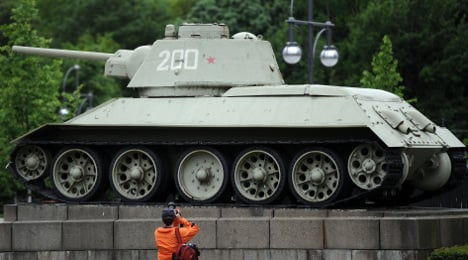 One of the WWII Russian tanks near the Brandenburg Gate. Photo: DPA

The German government rejected on Wednesday a call by two newspapers to remove Russian tanks from a World War II memorial in central Berlin in protest against spiralling tensions in Ukraine.

The top-selling daily Bild and local tabloid BZ launched a petition drive Tuesday to urge parliament to send a message to Moscow against last month's annexation of Crimean peninsula and the military build-up on Ukraine's eastern border.

However, Chancellor Angela Merkel's deputy spokesman Georg Streiter quashed the bid Wednesday, noting that Berlin had signed a 1990 treaty with Russia pledging to "respect, maintain and care for" the Soviet war monuments in Germany in their current form.

"The German government complies with this commitment and honours this particular way of commemorating fallen Red Army soldiers," he told reporters.

The Soviet War Memorial in the Tiergarten park, one of three large Russian monuments in the German capital, is dedicated to the 80,000 Red Army troops killed during the Battle of Berlin in the spring of 1945.

It was erected just months after the end of World War II and stands near the Reichstag parliament building and the Brandenburg Gate, the symbol of Germany's post-Cold War reunification.

The memorial features several columns, a giant statue of a Russian soldier and two T-34 tanks.

Germany's criticism of Russia during the crisis in Ukraine, a former Soviet state, has at times been muted by the countries' close trade ties but also by the weight of Berlin's war-time guilt.

An estimated 20 million Soviet citizens are believed to have died in the conflict unleashed by Nazi Germany.