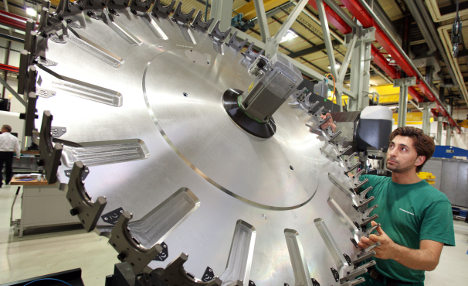 Economy Minister Sigmar Gabriel said that economic growth "is on a broad and stable footing," as he predicted that gross domestic product (GDP) growth would accelerate to 1.8 percent this year and two percent next year compared with a meagre 0.4 percent in 2013.

"The German economy is in a solid upturn," Gabriel insisted. "The driving force is domestic demand," the minister explained, pointing to "continued favourable developments on the labour market, strong increases in household income, positive business sentiment and rising investment."
Gabriel's forecasts are in line with the predictions of other key observers.
Germany's central bank is pencilling in growth of 1.7 percent for 2014 followed by two percent for 2015 and the European Commission is projecting growth rates of 1.8 percent and 2.0 percent respectively.
Just last week, Germany's leading economic think tanks raised their growth forecast for this year to 1.9 percent, followed by growth of two percent next year. However, some clouds seem to be beginning to form in the economic skies above Germany.

The economic institutes warned of headwinds from new government policies, such as the decision to lower the retirement age to 63 and the introduction of a fixed national minimum wage from 2015.
And in the more immediate term, too, geopolitical factors could also throw a spanner in the works of the nascent recovery.
The Ukraine crisis is hitting the investment climate in Germany which has close business and energy links with both Russia and Ukraine.
Investor sentiment fell to the lowest level for eight months in April, a leading survey found.
The widely watched investor confidence index calculated by the ZEW economic institute fell by 3.4 points to 43.2 points in April, the lowest level since August 2013.
It was the fourth straight monthly drop in a row and steeper than analysts had been expecting.
ZEW president Clemens Fuest pointed to uncertainty generated by the conflict in Ukraine.
One mitigating factor was that a component of the index measuring financial market players' view of the current economic situation in Germany rose by 8.2 points to 59.5 points in April, its highest level since July 2011.

No stagnation or recession

Berenberg Bank economist Christian Schulz said that while the crisis in Ukraine "is continuing to sow uncertainty among financial analysts," and could lead to a slowdown in German economic momentum over the coming six months, there was no prospect of new stagnation or even recession."
The undercurrent remained firm, he said.
"And that may act as a shield for the eurozone recovery overall," Schulz said.
ZEW also calculates a sentiment index for the eurozone as a whole and that slipped only slightly by 0.3 points to 61.2 points in April.
ING DiBa economist Carsten Brzeski said "the geopolitical conflict close to Germany's backyard, concerns about the Chinese economy and the recent equity market correction have clearly dented investors' optimism."
After the excellent start to the year, the German economy was now starting to feel some headwinds, Brzeski said.
"More and more gusts of wind, particularly from the East, could easily disturb real spring fever on the island of happiness," Brzeski warned.
Capital Economics economist Jonathan Loynes found the ZEW survey "brought further evidence of strength in the German economy. But the fall in expectations raises some concerns …over the sustainability of the recovery further ahead."
SEE ALSO: US and Germany clash on trade pact standards