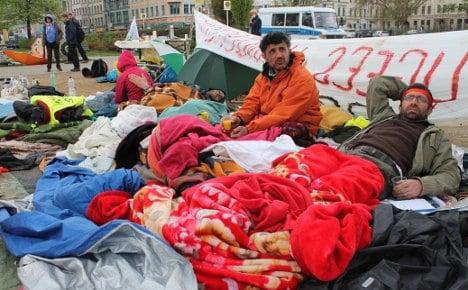 The hunger strikers on Kreuzberg’s Oranienplatz, who come from Iran, Ghana, Uganda and Turkey, are staying on a tarpaulin on the north side of the square and are now in their sixth day without solid food. They told The Local they were undeterred by rain, cold or the heavy police presence around them.

Some claimed they will face death or long prison sentences in their home and are demanding the right to stay and work in Germany.

The strike began in support of Sudanese refugee Napuli Langa, who climbed into a tree while the camp was being dismantled last week.

She remained there, surrounded by metal fences and police, until Berlin's Integration Senator Dilek Kolat (SPD) agreed to allow protesters to expand their info point on the square and build a tent for public assemblies.

Napuli returned home on Sunday, but the other activists say they will continue their hunger strike until two other demands are met.

They are asking the government to approve their asylum applications and the city to recognize the nearby Gerhart-Hauptmann school as a political centre for refugees.

Turgay Ulu, an anti-capitalist journalist and author from Turkey, is one of the strikers. He fled his country after he was charged with “terrorism”.

Now he spends day and night wrapped up in a blanket on the square, drinking juice, reading newspapers and chatting with supporters.

"We are on the street. It is cold overnight and sometimes it rains. That is difficult. I have a bit of a headache and I'm a bit tired but it's going OK," he told The Local. He said the protesters will stay "until their demands are met," but admits that the group will have to discuss matters if the strike goes on for several weeks.

There are some signs for optimism. As part of the deal that convinced Napuli to come down from the tree, city officials agreed to further negotiations with the protesters, Turgay said.

Abby Damulira, who said he left Uganda after he faced prison for a protest he helped organize, is also participating in the strike.

"We hope that people will feel for us, because it is not an easy thing to be in such a situation. But we have no option," Abby told The Local.

He said his asylum application has been repeatedly denied and he is facing deportation back to Uganda.

Abby said he was afraid of what awaits him if he goes back to Uganda.