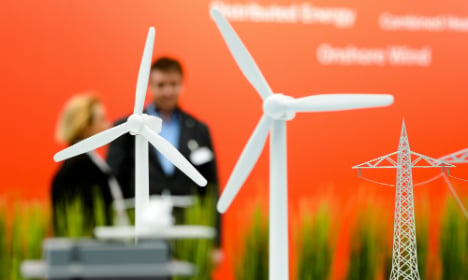 Chancellor Angela Merkel has said that if the "Energiewende" – the ambitious switch from nuclear and carbon-based energy toward renewables – goes as planned it will be "another export hit".

So far Europe's biggest economy has not been widely emulated on its radical path to a clean-energy future, but for businesses in the energy-efficiency sector, Merkel's prophecy is already a reality.

Energy efficiency was a key theme at Hanover's industrial fair, one of the world's biggest, which ended on Friday.

When it comes to machines, tools and systems that consume the least energy, German companies from world-famous Siemens and Bosch down to the country's highly specialised small- and medium sized enterprises often have the answer.

Martin Lack can explain in great detail how his company, the Luetze family group, has developed a system that circulates air efficiently in power distribution systems to lower temperatures and avoid energy loss.

The system is based on a study by Luetze, automaker Volkswagen and another German technology group, Rittal, which found ways to reduce energy consumption in such systems by 15 percent.

"It is energy-saving technology that offers the greatest potential" for German companies, said Carola Kantz, who is in charge of the issue at the VDMA, the German Engineering Federation.

Germany launched its energy shift in the late 1990s and, after Japan's 2011 Fukushima nuclear disaster, set itself even more ambitious goals, including to halve primary energy consumption by 2050 through savings in homes, industry and transport.

Less visible and less publicized than wind and solar farms, energy efficiency is the aspect that is the "most misunderstood of the energy transition, and yet the one that works best," said Stephan Kohler, president of German energy agency Dena.

"The success of the German economy owes much to the fact that its products help achieve energy savings," he said.

Germany, in turn, has strongly promoted the sector with the government's so-called Energy Efficiency Export Initiative.

Its website, "efficiency-from-germany.info", highlights that Germany, which has traditionally had to import most of its energy, has achieved reductions in energy usage despite growing economic output.

It says that in the early 2000s, German researchers and companies submitted between 30 and 40 percent of global patent applications in the areas of energy-efficient building services and industrial processes and technologies.

"In Germany there has been this expertise, this tradition of technologies related to environmental protection," said Rafael Piechota, at the stand of Paul Wurth Umwelttechnik.

Paul Wurth Group, a technology provider for the steelmaking industry headquartered in Luxembourg, chose Germany as the hub for its "green" technologies subsidiary, which provides turn-key systems to optimize energy efficiency as well as environmental plants in iron and steel mills.

The system has been exported to customers all over the world, said Piechota.

A little further along the fair's aisles, Michael Punz was showcasing the LED lamps of Berlin-based company i-save, which promise to use "at least 40 percent less" than old fashioned fluorescent tubes and other light systems.

The eco-friendly lighting system has been used by customers including Sharp Corp, Toyota and Qantas Airways, and the company also provided the lighting in the halls of the Hanover fair.