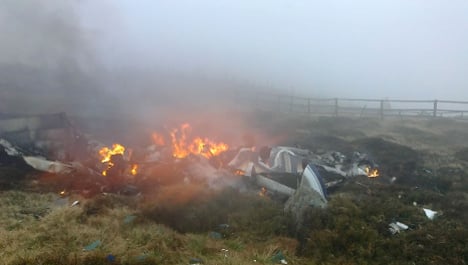 The wreckage of the crash. Photo: DPA

Police in Magdeburg said the plane crashed in thick fog and caught fire between 8.30am and 8.45am.

The aircraft hit the 27-metre high mast of the weather station on top of the Brocken mountain in the Harz region, according to a worker at the station.

The Cessna single engine plane crashed around 150 metres from the mast after hitting it.

The 38-year-old pilot and the passenger died in the burning aircraft, police said,

They were travelling from Rügen to Reichelsheim near Frankfurt am Main to pick up a car.

Visibility around the mountain which is 1,141 metres high, was reportedly 20 metres. The Brocken mountain plays a significant role in German literature.

And the 19th century author Heinrich Heine climbs the mountain in his book "Die Harzreise" which was published in 1826.