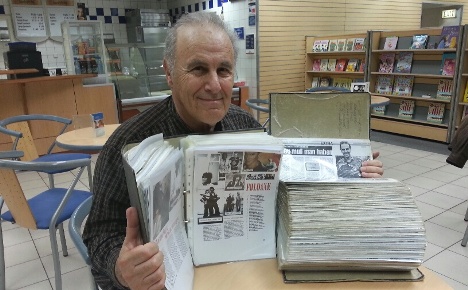 Over the past 23 years, London-born industrial designer Roger Field, who lives in Wiesbaden, Hesse, has been calling up journalists to tell them his story and about his friendship with Schwarzenegger.

The man who invented the "folding guitar" claims he has been featured in over 1,000 articles published in 67 different countries.

"I imagine I am by far the most written about private person in the world, if I may say so modestly," 68-year-old Field told The Local.

He collects clippings from newspapers and magazines in two huge binders. "You can hardly carry them. They're grossly distended," he said.

It all started after Field, then studying in California, took a trip to Munich and befriended a 20-year-old Schwarzenegger.

In the summer of 1968 the Austrian bodybuilder, soon to be crowned "Mr Universe," was planning to move to America to begin an acting career.

He was looking for an English coach, and a friend hooked him up with Field.

The pair spent much of the summer working out, practicing English and cruising around in Arnold's '58 Ford Taunus.

But things turned slightly sour when Field, still smitten with his sweetheart back home, refused to accompany Schwarzenegger on a double date.

Field recalled: "There were these two girls who hung around the gym. They were pretty ugly. He wanted us all to go to his place together but I didn't want to. He wouldn't speak to me anymore after that and there was silence for 44 years.”

The industrial designer said that Schwarzenegger was a "really nice guy," but had a big ego and was not used to being refused.

"You just don't say no to Arnold… He wasn't exactly modest, he kept saying 'I will become the greatest actor.' He kept saying it over and over… so he doesn't like it if you don't go along with him,” Field said.

As Schwarzenegger went to Hollywood and starred in blockbusters like Terminator and Kindergarten Cop, Field and his girlfriend got married and moved to Germany. He took up a job working for Airbus and eventually settled down in Wiesbaden, Hesse.

Seeing his old friend's skyrocketing success was not easy on Field.

So beginning in 1991 he started contacting the media – everyone from Der Spiegel to Penthouse – and telling them about that famous summer. Field has been featured in Playboy 20 times across the world – most recently in the Slovenian edition.

‘Bored out of my mind in Wiesbaden’

His other claim to fame is the folding guitar he crafted – a technical innovation that renowned Nashville guitarist Chet Atkins had told him was "impossible."

Field took up the challenge and put together a travel friendly instrument that has since been played by Paul McCartney, Eric Clapton and Keith Richards, among others. But he has no plans to produce the guitar commercially, fearing it could dampen the novelty of his invention.

"It's so unique that it gets me in the press a lot and that means more to me than making a few bucks selling a few," he said.

But living in Wiesbaden with his wife and his cat "Sweetie" for the past 42 years is starting to wear on Field, who misses the sunshine of the Californian coast.

He plans to return to America next year. In the meantime, he will keep working on his campaign to become the most written about man in the world – a pastime that cuts through the humdrum dullness of living in Wiesbaden.

"To be honest, I'm bored out of my mind here… it gives me something good to do," said Field.

All the effort finally paid off in 2012, when Field saw Arnold again for the first time in 44 years at a book fair in Frankfurt.

"I wanted to get famous a bit and attract Arnold's attention so that he'd remember me. And in fact it worked because he was real nice when I saw him again. …He was really happy to see me. We kind of embraced."

Field said he will contact the Guinness Book of Records when he is finished with his campaign.