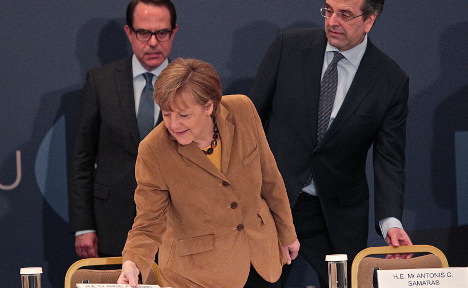 "I firmly believe that after a very, very tough phase, this country harbours boundless possibilities still to be exploited," Merkel told a group of young Greek entrepreneurs at the start of a one-day visit to Athens.

Merkel is meeting with Greek Prime Minister Antonis Samaras to show her confidence in his government a day after Greece re-entered international bond markets.

The pair will discuss funding for a Greek development bank and will meet with young entrepreneurs.

A statement from the German government said that the chancellor wanted "to praise the reforms implemented by the [Samaras] government" and to signal that "the successful austerity measures of Greece should be further supported".

But authorities were taking heavy security measures on Friday with at least 5,000 riot-police on hand to deal with planned protests.

Protests broke out in Athens on Thursday in expectation of the meeting and a car bomb was set off a block away from Greece's central bank.

The main opposition party Syriza, unions and other groups have announced further protests for Friday.

Many have long viewed the chancellor as responsible for the austerity measures and social turmoil that have gripped the country.

Hoping to maintain control of the city, police have cordoned off the government district. They have shut down two subway stations and banned protests in large swaths of the city.

At her party convention a few days ago Merkel said that she admired Greek efforts to break out of the crisis, and recognized the difficulties reforms have caused for the Greek people. "We stand by the side of Greece," she said.

There are signs that the country is starting to pull out of its economic crisis, with a successful return to capital markets that raised €3 billion testifying to strong interest from investors.

Interest rates were down to 4.75 percent on Thursday’s re-entry. They were more than 30 percent at the height of the crisis.

But these positive signs have done little to alleviate the plight of the population, with the country's unemployment rate stuck at 27.5 percent.