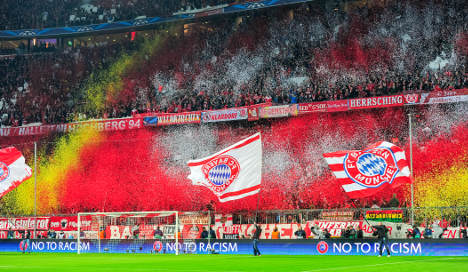 The attack took place before the match on Wednesday night in Munich. Photo: DPA

Officers said the English football fans were trying to fly back to Manchester when they were arrested. They were identified from CCTV images.

All four were arrested on suspicion of grievous bodily harm.

Three men, aged between 18 and 19 years old, were arrested on Thursday afternoon while police caught the fourth man at 5.30am on Friday.

Jürgen Vanselow, head of police at Munich train station said: “It was only thanks to the images from the video surveillance that it was possible to identify the suspects so quickly and arrest them. This is further proof that cameras in stations and trains are essential for efficient law enforcement.”

As reported on Thursday, two men were attacked at 7.15pm on Wednesday on the platform of Munich’s main train station after one of them bumped into a group of Manchester United supporters.

The man walked into a football fan who was with a group of around ten people. According to police the fan then punched the 21-year-old who fell to the ground.

The group then started kicking him while he was on the floor.

His 23-year-old friend from Erding tried to intervene but was punched and kicked in the head. He was also thrown against a pillar.

The 21-year-old from Munich was cut and bruised from the attack and his trousers were ripped. His companion was also injured.