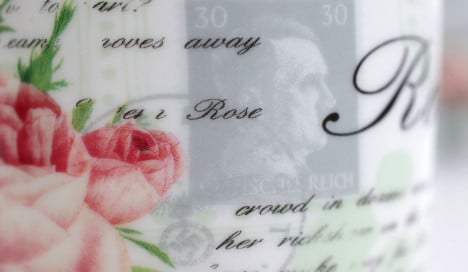 One of the 5,000 mugs bought by the firm from a Chinese supplier. Photo: DPA

The Bielefeld branch of the Zurbrüggen furniture store chain ordered 5,000 of the mugs and sold 175 of them for €1.99 before staff notice that Hitler's face and a Swastika formed part of the cup's complex design.

Furniture chain boss Christian Zurbrüggen said the discovery was "dreadful" and apologized to those who bought the cups. He described the oversight as "a pretty stupid series of unfortunate events," the Neue Westfälische Post reported.

One woman who unwittingly bought the mug said she got a shock when she looked more closely at her purchase over breakfast.

Partially obscured by rose petals and an English love poem was a pale print of a 1930's postage stamp featuring the Führer. "I couldn't believe my eyes," she told the Neue Westfälische newspaper.

It has since emerged that the Chinese designer behind the mugs did not realize whose portrait he was using. According to the furniture chain, no one raised the alarm at any stage during the process of exporting and importing the offending mugs.

"Nobody noticed anything when they were unpacking and sorting," Zurbrüggen said.

The furniture chain boss has vowed not to sell any more of the 5,000 cups ordered and has offered anyone who returns one a €20 voucher.

And the mugs could now go in the Haus der Geschichte museum in Bonn. A spokesman for the museum said they showed the complications of a globalized world, the Neue Westfälische reported.