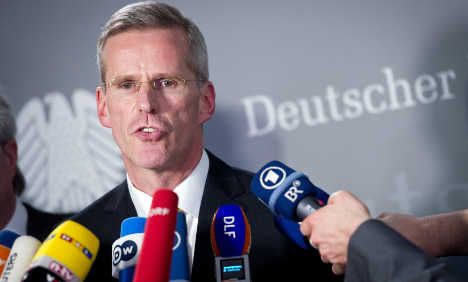 Clemens Binninger speaking to the press April 3rd after the first meeting of the committee. Six days later, he resigned. Photo: DPA

Germany's opposition Green Party and left-wing Die Linke had pushed for the whistleblower to be summoned to the committee and for Germany to provide him with asylum.

But Green Party politician Christian Ströbele, who sparked controversy last October when he met Snowden in Moscow, told the Passauer Neue Presse he believed the government had exerted considerable force.

"After the last sitting, both Social Democrat and Conservative politicians were prepared to call Snowden as a witness," Ströbele said. "The chancellor evidently wants to prevent that and has no interest in any sort of explanation in advance of her trip to the United States. Instead she wants to bury the spying issue."

Merkel is set to visit the United States at the start of May.

Binninger had claimed the debate about Snowden was overshadowing the work of the committee. "A committee of inquiry should not primarily serve party-political ends," he said.

And the former head of the Federal Intelligence Service (BND), Hans-Georg Wieck, advised the committee to interview Snowden in Moscow. "One can't invite him to Germany because we can't offer him safety here since German-American relations are too important," he told the Mitteldeutsche Zeitung.

The inquiry committee only began its work last week and CDU politician Patrick Sensburg has taken over as the new head.

Relations between Germany and the United States have been strained since the revelation of mass spying on both ordinary citizens and the Chancellor by America’s National Security Agency (NSA).

Details of a planned free trade agreement with the US have also caused concern among some Germans.