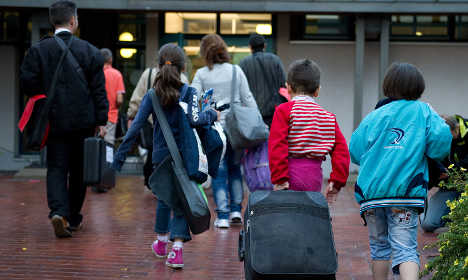 Photo: DPA
In March 2014 79.2 percent more people applied for asylum than in the same month the previous year, according to the Federal Office of Migration and Refugees (BAMF).
A total of 11,280 people sought asylum in the country during the last month, 9,839 of whom were applying for the first time.

Most of the asylum seekers in March 2014 came to Germany from Syria  (1,786 people) and Serbia (1,386 people), according to the BAMF report released on Wednesday.

There were also just over a thousand people who came to Germany from Afghanistan and around the same number from Macedonia.

"Asylum applications have in fact been rising steadily since 2009," a spokeswoman for BAMF told The Local, adding that the number had almost tripled within a few years.

"The reasons are varied," she said. "We continue to see many cases of asylum applications from countries like Afghanistan, where the situation hasn't improved. But of course there are new crisis hotspots like Syria too."

There has also been an increase in asylum applications from Chechnya."Political persecution is the most common reason," she said.

The BAMF said 2,098 were granted asylum under their rights as a refugee as per the Geneva convention, around 19 percent of the total applicants for the month.

Meanwhile 632 gained "subsidiary protection" under EU guidelines and 160 were granted "deportation bans" allowing them to stay in the country on the grounds of their Geneva Convention right not to be deported to a nation where they would be in danger due to race, nationality or political views.

However, the majority of asylum applications are still either rejected or "otherwise settled" (this is usually a matter of the applicant cancelling the asylum request because the circumstances at home have changed).

In the first quarter of 2014 so far, 31 percent of applicants were refused asylum and 45 percent were "otherwise settled".