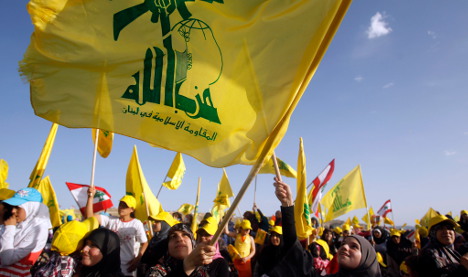 Supporters wave Hezbollah flags in Lebanon in May 2012. Photo: DPA
The interior ministry said it had outlawed the "Waisenkinderprojekt Libanon" (Orphan Children Project Lebanon) with immediate effect, although on Wednesday morning the group's website was still up and running.
"The name of the group masks its actual purpose," ministry state secretary Emily Haber said in a statement.
She said the organization, based in the western city of Essen, had raised €3.3 million in donations between 2007 and 2013 for the Lebanese Shahid Foundation, an "integral" part of Hezbollah.
The ministry said the funds were used to recruit fighters "to combat Israel, also with terrorist measures" and compensate the families of suicide bombers.
"Organizations that directly or indirectly from German soil oppose the state of Israel's right to exist may not seek freedom of association protection," Interior Minister Thomas de Maizière said in the statement.
He said the group's goals violated Germany's constitution.
Around 160 police officers searched premises across six states and confiscated cash, computers and 120 boxes of files. The raids took place in Berlin, North Rhine-Westphalia, Baden-Württemberg, Bremen, Lower Saxony and Rhineland Palatinate.
Two bank accounts with a total of around €104,000 were frozen but no arrests were made.
The ministry said it had kept Waisenkinderprojekt Libanon, which has about 80 members, under surveillance since 2009.
Hezbollah, which brands itself a resistance movement against Israel, was formed in 1982 by Iran's Revolutionary Guards and was the principal actor in ending Israel's occupation of southern Lebanon in 2000.
It acknowledged early last year it was sending fighters into Syria to support President Bashar al-Assad's forces in the country's three-year war.
Authorities say there are around 1,000 Hezbollah supporters living in Germany.
The European Union in July last year listed Hezbollah's military wing as a terrorist organization.
SEE ALSO: Police arrest three over radical Syrian links