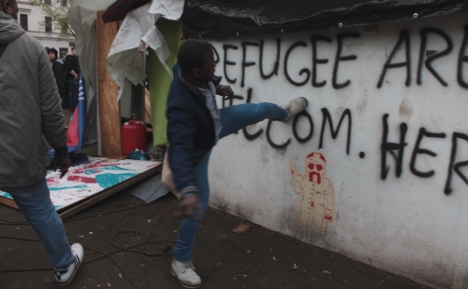 P { margin-bottom: 0.21cm; } Starting at about 6am, without police present, a group of refugees began tearing down their shacks and tents on Oranienplatz in the Kreuzberg area of the city. The makeshift homes were then carted away by bulldozers and city workers.

The structures were part of a protest camp set up in 2012 by a group of asylum seekers who marched from Bavaria in a protest for better refugee rights.

Those demolishing the camp explained that authorities had offered them accommodation and a suspension of deportation in exchange for their cooperation. Most had arrived in Lampedusa from Libya, but came to Germany after facing joblessness and discrimination in Italy.

They proudly showed their keys and were adamant that they would stay in Germany.

Bashir Zakariya Youssef, who originates from Nigeria, said he has lived in the camp for the past year.

"All the deportations were suspended. They will give us a place to stay… we are asking for permits to work," he told The Local. "They've offered us education. We have a lot of people who want to start their lives."

But other residents of the camp were not convinced. They were sceptical about the government's offer and rejected the authority of other migrants to make decisions on their behalf.

Ibrahim, who came to Germany from Niger, opposed the demolition. He said it was mostly the work of Nigerian refugees, some of whom did not even live in the camp.

"There are people here who have accepted, but not everyone… [the Nigerians] have accepted the contract, and now they say we all have to leave," he explained.

He was determined to resist. "Break what you want to break, but no one is touching my house," he said. Residents opposing the demolition were eventually joined by a large group of activists, including Hakan Tas, a member of the Left's faction in the Berlin city senate. He explained that the conflict arose from the different status of the refugees living in the camp.

"There are two groups. The so-called Lampedusa refugees, who already have official status in another EU country… and a group who have already had their applications rejected in another German state," he told The Local..

While the agreement meant the first group would automatically profit from a six-month extension of their stay, the others could still be deported on an individual basis.

The Lampedusa refugees continued their demolition work throughout the early afternoon. Arguments and short scuffles broke out between them and the other refugees and activists.

"Let the police do it, not you!" one man shouted.

Some of the Nigerian migrants were upset at the presence of the activists, who they felt were denying them a opportunity to move into better housing.

"Give us a chance not to be sleeping like animals… we are sleeping with rats here," Bashir said. He even accused the activists of stealing money donated to the refugees, and challenged them to sleep in the camp with him.

An activist responded that they were concerned that the authorities were trying to split the migrants up, and would still deport all of them after six months.

"I will be in Germany for my whole life!" Bashir shouted back.

At around 2pm activists remained on the scene to protect the few remaining shacks, making human chains and organizing a sit-in. Riot police arrived shortly after and broke up the demonstration, dragging protesters away.

By 3:30pm police had cleared everyone from the square. Activists have announced a demonstration leaving from Kotbusser Tor in Kreuzberg at 8pm.