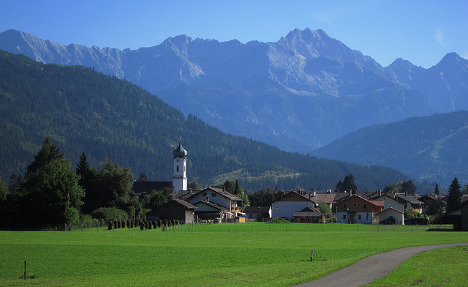 The village of Farchant stands at the foot of the Fricken mountain where the cave is located. Photo: DPA

P { margin-bottom: 0.21cm; } The man's wife alerted the police and mountain rescue when on Monday morning her husband had not returned from a walking trip as expected, Münchner Merkur newspaper reported.

She said her husband had wanted to spend a night alone in the caves, something he had done before, she said.

Most hikers only venture 300 metres into the tunnel, until the passage goes underwater.

Yet on Sunday the man found the passage clear and continued further inside before overnight rain filled the narrow route again and trapped him in the tunnels, the paper said.

The cave network at Fricken, near Garmisch-Partenkirchen, is 1,258 metres above sea level and is one of the longest in Germany, with over three kilometres of passageways.

After being called to the cave, rescue services sent a diver in to find the stranded man and keep him company until the water could be pumped out and the exit cleared.

After the initial diver made contact, Bavarian Mountain Rescue spokesman Thomas Griesbeck told the Münchner Merkur "the man was hypothermic, but so far doing well."

By 3pm, enough water had been removed that the man could be safely led out of the tunnel and extracted by helicopter to Garmisch-Partenkirchen hospital for treatment.

The case was an example of a tricky rescue gone right, Griesbeck said. "Cave rescues are extremely difficult and dangerous.

"Therefore it's even luckier that the patient could be saved and came through his time in the cave so well."