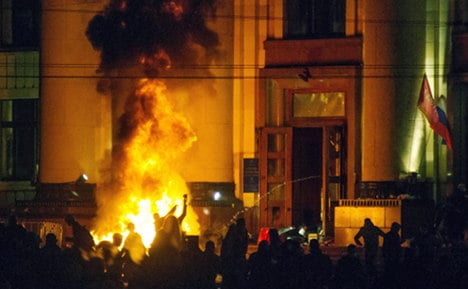 On Monday, the demonstrators proclaimed independence from Kiev and vowed to hold a referendum on joining Kremlin rule.

"We in the German government have been observing recent events in Donetsk and Kharkiv with a great deal of concern," he told reporters.

"We must renew our urgent call to work toward the stability of the region so that such flare-ups can be avoided."

Foreign Minister Frank-Walter Steinmeier said later that recent events showed "how difficult the work still ahead of us, in effect, is" and urged efforts to stabilize Ukraine economically and politically.

"That will not succeed if the country moves towards a political division," he told reporters after a meeting of his Social Democratic Party's leadership in Berlin.

Meanwhile Seibert said Berlin was "disappointed" there was no "verifiable" sign of a partial withdrawal of Russian troops from a sensitive border region with Ukraine that President Vladimir Putin announced during a telephone call with German Chancellor Angela Merkel last week.

"Of course we are not the only ones waiting for such urgently needed confidence-building measures to become apparent," he said, adding that a troop withdrawal from the region would mark a "step toward deescalation."

Seibert said that Germany was nevertheless committed to "dialogue" with Russia "with the aim of rapprochement, diplomacy and deescalation."