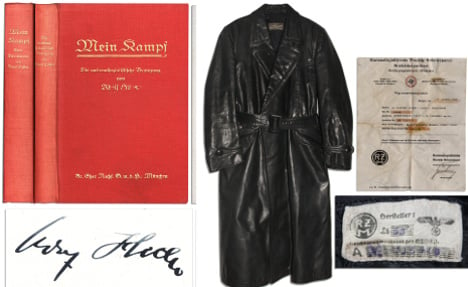 A leather jacket worn by his chief architect Albert Speer also went for €7,300.

The two-volume set – a first edition and a second edition – of the future German Führer's political manifesto had been estimated to go for around €18,000 in a sale organized by Nate D. Sanders Auctions.
Eleven people bid for the volumes, both signed by Hitler and dedicated to Josef Bauer, an early Nazi party member and a leader of the 1923 Beer Hall Putsch bid to overthrow the Bavarian government.
Hitler likely gave them to Bauer as Christmas gifts in 1925 and 1926, expressing best wishes for the holiday season, the auctioneers said.
They called the books "an ominously signed set of books that futilely warned the world of Hitler's intentions," adding they were more rare in that they were dedicated to a fellow Nazi leader.
Thursday's auction also sold a leather jacket owned by Albert Speer, Hitler's chief architect and minister for armaments and war, which fetched $10,000 around €7,300.
After the war, the jacket was seized by an Allied soldier named Ralph, who wrote in a letter to his mother in May, 1945: "Looked around today in a huge chalet of a high-ranking Nazi.
"For you I have a gold necklace. And for Dad, I have a great leather jacket…I took a coat with no Nazi symbols on the outside. Unfortunately, the name of Nazi Albert Speer is stamped in the jacket…"
SEE ALSO: Bavarian town rejects anti-Hitler vote