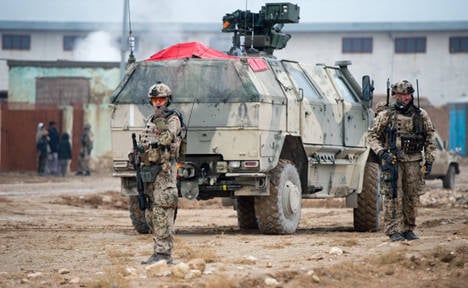 German troops are stationed in the north of the country. Photo: DPA

Figures from Germany’s army, the Bundeswehr, released on Wednesday showed that attacks by Taliban insurgents on Afghan soldiers and police, as well as international troops, in northern Afghanistan increased by 35 percent in 2013.

There were 1,660 incidents, which include bombs and ground fighting, in the region, which is currently under German watch as part of the Nato International Security Assistance Force (ISAF) mission, due to end later in 2014.

ISAF put out slightly different figures. It stated that the number of “enemy attacks” in northern Afghanistan increased by 99 percent in the first six months of 2013, but by only 26 percent in the second half of the year.

Germany's Joint Operations Command put this leap up to an increased “operating tempo” of the Afghan army and police against insurgents active in the area.

Attacks were, a spokesman said, “a result of trying to stabilize” and should not necessarily be taken as a sign that the situation had deteriorated.

Germany's foreign ministry insisted on Wednesday that northern Afghanistan, where the country’s troops are stationed, is much less strained than the south and east of the country.

Yet figures from ISAF revealed that in the country as a whole, insurgent attacks rose by four percent in the first half of 2013, then dropped by seven percent in second half of the year.

The German army said recently that it would no longer be publishing statistics on Taliban attacks in northern Afghanistan.

A report on the situation from five German ministries is expected in February. It will examine the threat posed by the Taliban; including factors such as how much respect citizens have for the Afghan government, as well as how effective regional powers are.

German troops have been withdrawing of Afghanistan for some time. Attacks aimed specifically at international forces have declined, with 117 foreign soldiers in total dying last year. In 2010 this figure peaked at 630.

When ISAF’s operations finish at the end of 2014, it will be replaced with a smaller operation known as “Resolute Support.” Germany will contribute 800 soldiers to this effort.