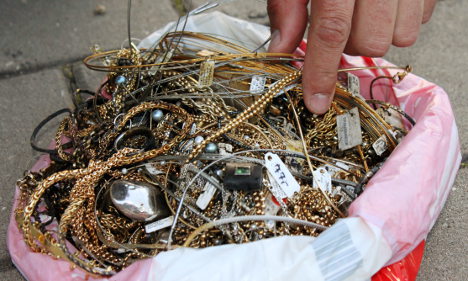 Some of the treasure retrieved from the pond. Photo: Stephanie Wilcke/Donaukurier/dpa

Police said the youngster came across jewellery in a pond in the village of Heideck, south of Nuremberg, on Wednesday.

They initially believed it to be worth around €10,000, but on Friday a police spokesman said the find was worth tens of thousands of euros and included rings, bracelets and necklaces.

The child was out walking with his family in the early evening when he found the treasure buried on the edge of the pond.

His parents told the Donaukurier that the boy was poking around with a stick in the water and cried out to his parents when he saw something glittering.

"At first we just thought that it was wire or something like that," his father told the newspaper. "But then we saw there was a fine necklace and that there were a few more in the water."

The family started taking necklace after necklace out of the water before finding a bag full of jewellery.

Police said on Thursday they believed more treasure was hidden in the water and sent down divers to search.

They said in a statement on Thursday the jewellery was “clearly loot”.

“There are several hundred precious items and less valuable jewels,” a police spokesman said on Friday.

Some belongs to a jewellery shop in Erlangen which was robbed in January, but it is unclear how the treasure came to be in the village pond.