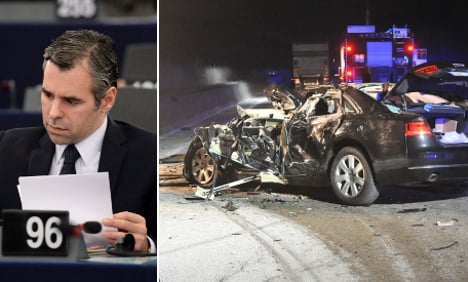 Alexander Alvaro from Germany’s Free Democrats (FDP) was driving between Bursheid and Leverkusen on Autobahn 1 and crashed into an Opel Vectra stranded in the middle of the lane.

The crash killed the 21-year-old driver on the scene and seriously injured two passengers, aged 15 and 16.

According to the prosecuting attorney, Alvaro was driving with excessive speed.

He was taken to hospital in a critical condition and remained in a coma for several weeks.

Alvaro returned to work in the EU parliament after his recovery, but last June MEPs voted to strip him of his immunity.

In October 2013 Alvaro said on Twitter that he would leave the parliament when his term came to an end.

He wrote: “Ten great years in the EP. Had fantastic experiences and have learned a lot. Now time to seek new challenges after this term. Goodbye #EP.”

His sentence for the charge could be up to five years.