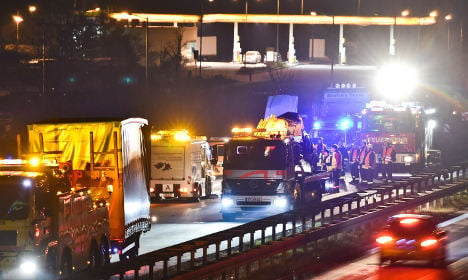 The scene on Tuesday morning on the A12 near Frankfurt (Oder). Photo: DPA

The accident on the A12 at Biegen near Frankfurt (Oder) at 1am involved a car and a truck.

According to police, a car carrying four people crashed into the truck and was forced underneath it.

Three people in the Toyota car, all Polish citizens, died at the scene, including two men aged 54 and 34. The third victim has not been identified.

The fourth person in the car, aged 39,  was taken to hospital by helicopter with serious injuries.

Police said on Thursday the car hit the truck in a traffic jam which had been caused by a police operation to crackdown on stolen cars travelling from Germany to Poland.