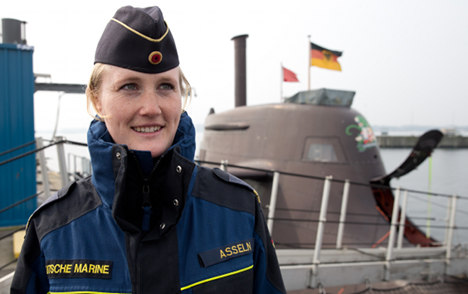 Janine Asseln at the Eckenförde navel base in Schleswig-Holstein. Photo: DPA

Since the beginning of the year, 27-year-old Asseln has held the role of fourth watch officer on the U-31 Delta.

She is the only woman in the German navy to be granted a commission on a submarine. Traditionally it was believed a female presence onboard brought bad luck.

“Anyone can handle being above water,” said Asseln, whose father and grandfather were both in the navy, and inspired her career choice. Only in Norway have female submarine officers started to become more the norm.

Growing up in Eckenförde in Schleswig-Holstein near the naval base she now works from, being on a submarine was, she said, always a dream of hers – but one which her mother and grandmother viewed with a little scepticism.

“They're all proud of me now,” she said, adding that her boyfriend was too. Asseln lives and works as the only woman alongside a team of 27 men.

Her boyfriend finds it tough, she said, when she's away for long stretches. “But he's completely behind me,” she said.

Like any member of the Delta crew, she had to earn respect from her submarine mates. “Of course they have a jab to see what you're made of,” she said, adding that everyone onboard “has to be able to do everything”. This requires a high level of ability.

For instance in an emergency, everyone needs to know which vents should be open or closed. For the most part, watch officer Asseln uses a periscope to keep an eye out above water, or help plan the route the submarine is taking.

But living onboard the submarine can be a bigger challenge than being an officer as there is very little space to move around in.

“I have more bruises than I could count in the beginning,” Asseln said. As for being a woman, Asseln gets no special treatment. She has her bunk with the men and got used to it relatively quickly. “Everyone has their own sleeping bag,” she said, but she admitted there is nearly no privacy.

Asseln has a curtain to hang up when she gets changed and said she tends "not to stand around in my underwear”.

The Delta crew heads out on its next mission in May when it will make for England and then over to Norway. Asseln has already been out on one long deployment.

As it stands, she is set to stay part of the team for the next few years.

Hopefully like her, other women will also make their way underwater.