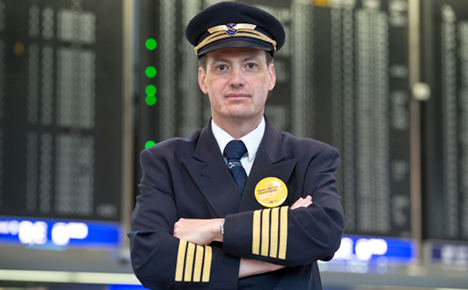 Lufthansa cancelled around 3,800 flights on Wednesday, Thursday and Friday, as a result of the walkout by pilots who are demanding better pay and retirement conditions.

In addition to Lufthansa's passenger services, the strike, which began at midnight on Tuesday and will last until 11:59 pm on Friday, will also affect the airline's Germanwings subsidiary and its freight carrier Lufthansa Cargo.
The walkout would cost Germany's biggest carrier "tens of millions of euros", it estimated.
In a bid to avert chaos, Lufthansa has been keeping passengers up to date about flight changes via text message or email and offering to re-book them onto other airlines.
Nevertheless, the situation at Frankfurt airport, the country's largest, remained calm on Wednesday, with few queues evident at check-in terminals. And those flights that were operating were proceeding normally.
"The aim is that people don't turn up at the airport for nothing," Lufthansa spokeswoman Barbara Schaedler told AFP.
Around 60 flights were already cancelled on Tuesday so that passengers changing planes in Germany would not find themselves stranded.
Germanwings said Tuesday it planned to uphold around 600 connections over the three-day period by leasing capacity from other airlines.

The head of the pilots' union Cockpit, Jörg Handwerg, writing in the Passauer Neue Presse, said the walkout was "the only means to force management to compromise".
The company's hardline stance was to blame, as it seeks to push back the age – currently 55 – at which pilots are able to take early retirement, Handwerg wrote.
But there seems to be little public sympathy for the pilots.
And the industrial action has angered many politicians, even in government, with Transport Minister Alexander Dobrindt complaining in an interview that
"every day of strike is impairing the mobility of hundreds of thousands of people."
And the deputy head of the parliamentary faction of the conservative CDU party, Michael Fuchs, slammed the action as "irresponsible."
There has also been criticism of the pilots from the centre-left Social Democrat party.
"The strike is totally excessive and will cause immense damage, not only for the tourism and travel industry, but for the economy as a whole," said Stefan Vorndran at the DRV industry federation.
Frankfurt airport operator Fraport slammed the industrial action.
"This is the third strike in six weeks at Frankfurt airport," said Fraport chief executive Stefan Schulte.
"All of this industrial action hits thousands of passengers and damages our reputation as an air hub," Schulte complained.
Just last week, hundreds of flights were cancelled at airports across the country as ground staff, baggage handlers and maintenance workers walked out over pay.
The strikes were staged by the giant services sector union Verdi and follow a series of walkouts across public services such as local transport in recent weeks.
Unsure about your flight? Check the cancellation list here.