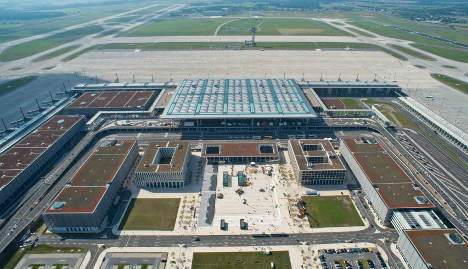 The new BER terminal near Schönefeld airport is already three years behind schedule and billions of euros over budget. Photo: DPA

The report, which quotes three anonymous "high-ranking insiders" from the project, also claims many working on the complex have worries about the buildings' safety and irregularities in the plans.

The experts warned that inconsistencies between different building plans could lead to disaster, with authorities unable to be sure of locating vital features such as fire doors in an emergency.

Safety and technical issues are so widespread that insiders believe the airport must either be gutted down to just the outer walls, or rebuilt from scratch, Bild claimed.

An internal "cost-control" body has produced a list of 66,000 "defects" in the new 10,000-square-metre terminal south of Berlin.

And despite being three years behind schedule, the Brandenburg regional government's airport committee announced last month BER was still only “four percent” problem-free.

The airport, which originally hoped to open its doors in 2011, is now not expected to be completed until after 2017, Bild said.

Berlin and its surrounding region of Brandenburg have a 37 percent stake in the project, while the German state owns 26 percent.

But the majority of the growing building costs will be settled from national coffers since debt-laden Berlin was not in a position to pay.