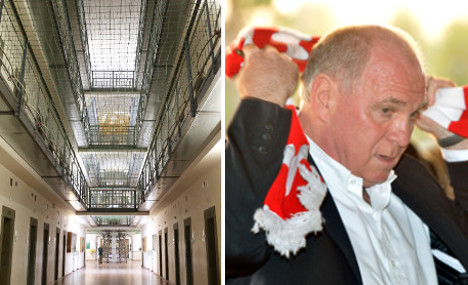 Landsberg Prison where Hoeneß will serve his sentence opened its doors to the media on Monday. Photo: DPA

Director of the prison, Monika Groß, told journalists on Monday’s tour that Hoeneß, who was sentenced to three-and-a-half years for tax evasion, should not expect any special treatment.

“Everyone will be treated the same,” she said.

Take a look around the prison here The German football legend will spend his first two weeks sharing a cell before moving to his own, eight square metre cell.

Prisoners are put to work according to their abilities and there is speculation in the German media that Hoeneß, a trained butcher, will become the prison’s butcher.

Hoeneß, who decided not to appeal against the ruling of the Munich court two weeks ago, will start his sentence in the coming weeks.