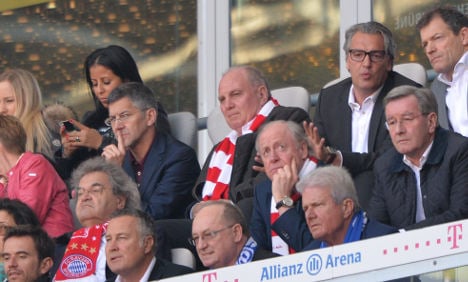 Hoeneß was sentenced to three and a half years in prison by Munich's regional court a fortnight ago when he was found guilty of cheating the state out of 28.5 million euros ($39.5 million) in unpaid taxes.

The 62-year-old resigned as Bayern's president and chairman of the club's supervisory board less than 24 hours after being convicted and Saturday's match was his first appearance in public as he waits to begin his sentence next month.

He looked relaxed, chatting to senior club figures in the VIP section of Bayern's Allianz Arena before kick-off in the sun-soaked Bavarian capital with Munich already confirmed as Bundesliga champions.

Hoeneß was not in Germany's capital on Tuesday to watch Pep Guardiola's side enjoy a 3-1 victory at Hertha Berlin which confirmed them as Bundesliga champions with a record seven matches to spare.

The 1974 World Cup winner is not expected to fly to England for Tuesday's Champions League quarter-final, first-leg match against Manchester United, although he is permitted to fly.

Hoeneß will serve his sentence in Landsberg jail, near Munich, where Adolf Hitler wrote 'Mein Kampf', and will go behind bars once all the legal paperwork has been completed, having opted to not appeal the verdict.

Before his arrival as an 18-year-old in 1970, Bayern had won just two of their 24 German league titles.

After Bayern's win in Berlin secured the title, coach Pep Guardiola praised Hoeneß for his service to the Bavarian giants.

"For me personally, this title is for Uli Hoeneß, he's an important person in the club," said the Spaniard, who has won three titles after just nine months in charge of Bayern.

Bayern have already named Karl Hopfner as his successor as club president.

Both positions must be ratified by a vote on May 2 at the club's general assembly.