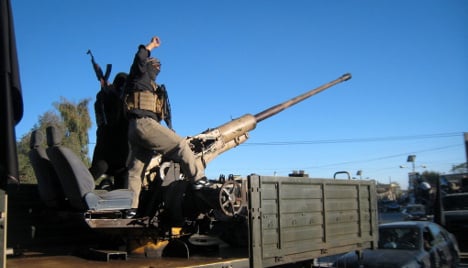 The ISIL is active across the Middle East. ISIL gunmen are pictured here in Iraq on March 20th 2014. Photo: EPA/MOHAMMED JALIL

Two of the suspects, a German and a Turk, are believed to have travelled to Syria last year and joined the militant group Islamic State of Iraq and the Levant (ISIL), which German authorities consider to be a foreign terrorist organization.

The third person, a woman with dual German-Polish citizenship, was taken into custody on suspicion of providing €4,800 to the group.
More than 100 members of the elite police squad GSG 9, the federal police force and state police conducted simultaneous searches of ten flats in the capital Berlin and the western cities of Bonn and Frankfurt, including the homes of five more suspects.
They are also believed to belong to or support ISIL.
Federal prosecutor Harald Range said that the operation showed "that violent conflicts like the one in Syria have a direct impact on us in Germany".
"We must decisively fight this phenomenon with all the means of the criminal justice system, with an eye to the possible dangers that radicalized people returning from Syria can pose to the population in Germany," he said in a statement.
ISIL has been fighting a war against anti-government rebels, including the Al-Qaeda affiliate Al-Nusra Front, since January across large swathes of western, northern and eastern Syria.
Hundreds of European nationals are believed to have joined Syria's civil war, raising fears that they will plot attacks in Europe when they return home.
The Local reported in February that German security services were monitoring a dozen Islamists who had returned home after fighting in Syria.
Around 270 German-based Islamists are believed to have travelled to the war-torn country.
SEE ALSO: German teen dies fighting in Syria