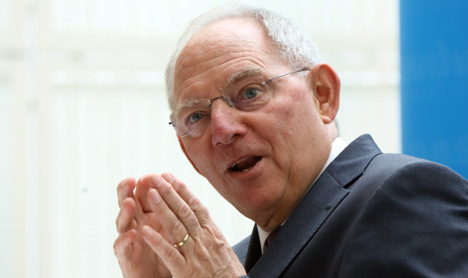 Wolfgang Schäuble made the comments in a talk to schoolchildren. Photo: DPA
The outspoken veteran politician said Russian President Vladimir Putin's declared desire to protect Russians and Russian-speakers in Crimea was similar to how Hitler justified the Third Reich's expansionist drive.
The German-speaking part of Bohemia, the Sudetenland, was ceded to Germany in 1938 on the eve of World War II when the republic was occupied by the Nazis.
"Such methods were already adopted by Hitler in Sudetenland," Schäuble told schoolchildren at a ministry event.
"We all know that from history," added the 71-year-old.
The provocative analogy runs counter to the official German line of keeping dialogue with Russia open in the hope of reaching a negotiated settlement to the Ukraine crisis.
Diplomats have been scrambling to find a peaceful resolution as Russia's annexation of the Black Sea peninsula has plunged East-West relations to their worst level since the Cold War.
Ukrainian demonstrators have also compared the Kremlin's decision to send troops to Crimea to the Nazi annexation of the Sudetenland on protest placards.
And former US secretary of state Hillary Clinton ran into trouble this month for reportedly comparing Putin's steps in Ukraine to Hitler's actions in the 1930s.
Asked about Schäuble's remarks later Monday, Chancellor Angela Merkel refused to endorse them but repeated her position that Russia's moves in Crimea violated international law.
"I consider the annexation of Crimea to be a unique case," she said.
SEE ALSO: Germany to give military aid to Baltics