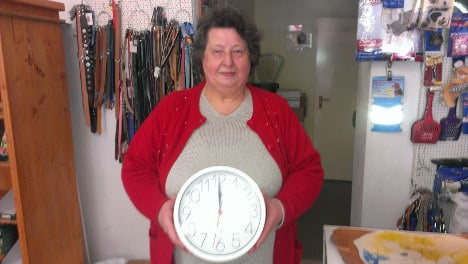 Renate Stahn, who grew up in the Prenzlauer Berg district of Berlin where her shop is located, told The Local she had had enough of the negative effects the time change had on her health.

"I have high blood pressure and I can't sleep – when you sleep badly you're less able to work," the 66-year-old said.

"Some people even have to take days off sick, or are not working at 100 percent efficiency," she added. "I will no longer take part in this circus."

Stahn first tried running her shop an hour behind summer time last year and found it so beneficial that this year she has expanded her sign (which notifies customers of her adjusted hours and urges them to join her time boycott) to four times the size.

She has installed it in an illuminated box above her door. Her boycott has already grabbed the attention of Berlin newspapers the Berliner Kurier and the Berliner Zeitung, who have named her "summertime-rebel" and a "Refusenik”.

"People call me a rebel because I am against turning the clocks forward – and that's the way it's going to stay," Stahn said.

Stahn has run her pet shop since October 2002, but it now focuses on accessories and food and no longer holds many animals, with only a few canaries left in stock.

The response to her peaceful resistance has been positive, Stahn said.

"A lot of people have congratulated me, they think it's fine,” she said. “They only regret that more people don't oppose it [the time-change].”

"I hope the politicians, who are elected by us, finally do the jobs they are paid for, answer to the will of the people and abolish the time-change."