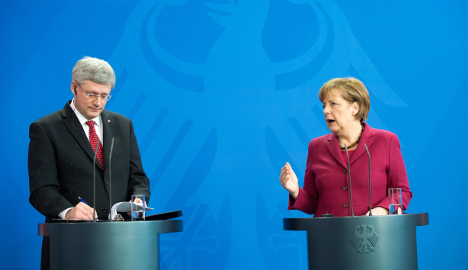 Harper and Merkel in Berlin on Thursday. Photo: DPA

Merkel was asked by a reporter after talks with Canadian Prime Minister Stephen Harper in Berlin whether Germans were prepared to accept the "pain" linked to economic sanctions against Russia over its land grab in Ukraine.

She said the European Union was counting on the spectre of further punishment to keep Russian President Vladimir Putin from making further incursions into Ukraine but would take firm action if necessary.
"I hope that we won't reach that point," she said. "Russia needs trade and exchange… That is why Russia stands to lose a lot. And that is why I am quite calm."
Merkel said nevertheless that Europe should overhaul its energy policy in the long-term to reduce its reliance on Russian oil and gas.
"There will be a new look at energy policy as a whole," she pledged, acknowledging the EU was still highly dependent on Russia for its fuel needs.
The two leaders also discussed bilateral trade relations, including the Canada-EU trade agreement that is now in the final phases of negotiation.
Harper indicated that Canada, a major energy producer, is eager to diversify its energy exports.
While Germany is also eager to diversify its suppliers in order to reduce its dependence on Russian gas, Merkel pointed out that the infrastructure needed to bring Canadian energy to Germany does not yet exist.
The EU last week slapped sanctions on 12 more officials linked to Moscow's takeover of the Crimean peninsula, bringing its blacklist to 33.
The 28-member bloc has said it would consider imposing economic sanctions on Moscow, but only if tensions over Ukraine continue to escalate.
Harper underlined his opposition to inviting Putin back into the G8 club of top economic powers following Russia's suspension this week.
"He has no desire to be a partner, he's desired to be a rival. That's just the reality that we have to come to terms with," he said of Putin.
"Personally – I only speak for Canada here – I don't see any way of return of Mr Putin to the table unless Russia fundamentally changes course on its orientation towards the world and its values and behaviour."
SEE ALSO: Siemens 'to invest long-term in Russia'